The Mexican Region of Tehuantepec has one key geographical characteristic: a lot of wind. And with the wind came many problems in the past decades. According to Bettina Cruz, those problems have a name: eolian companies, coming from mainly European states. These foreign companies do not understand the diversity of implications that their projects have, she says. They do not understand that when they implant windmills in coffee or corn fields, they are depriving indigenous communities from a main source of alimentation. They do not understand the cultural roots of those communities. And, say several social movements from the region, they do not care about dispossessing those communities of their own, lawful territories. 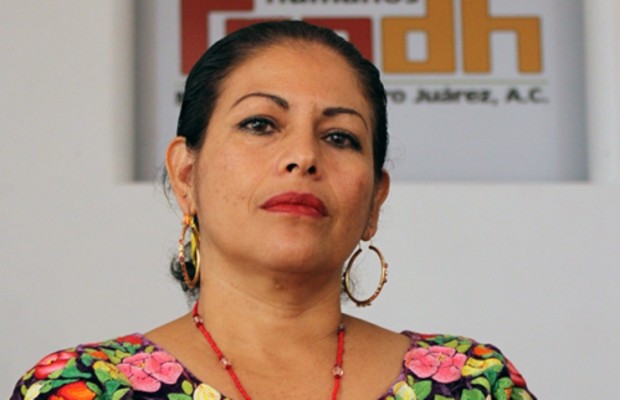 ‘I’ve been arrested and condemned in relation to a demonstration in which I did not even participate.’

On 13 April 2013, different communities from Tehuantepec carried out a peaceful demonstration in front of the premises of the Comisión Federal de Electricidad (CFE), a semi-governmental institution, to protest against the complicity of the CFE with allegedly illegal contracts that disregard the ownership of the land, as well as other human rights violations related to the installation of wind farms in the region. Bettina was, at that time, in another city undertaking a different activity in defense of community rights. Yet, she was detained and imprisoned and had to pay no less than 15,000 Mexican Pesos to be released until a final formal decision concerning her charges of ‘crimes against national wealth’ and ‘illegal deprivation of liberty’ is delivered. Bettina already fears the form which this decision will take and the onerous and difficult appeal she will have to launch.

‘This kind of action is just another strategy to intimidate, prosecute and criminalise the work of human rights defenders.’

Bettina Cruz and her supporters believe that there is a worrying perversion of the judicial system taking place in order to suffocate the work of human rights defenders, especially their efforts to draw attention to the violations carried out by multinational companies around their large-scale projects which are backed by the Government. Many social protests in that context are criminalised and subject to long, irregular and apparently corrupt processes. When the defenders are women, the harassment is even stronger and sometimes leads to sexual violence. Bettina has suffered physical attacks and even death threats, with absolute impunity for the perpetrators.

‘We receive firm support from local and international NGOs and from our OHCHR office.’

When Bettina was first detained by unidentified men, Amnesty International released an alert on the concerns about her case and on the reiterated use of fabricated charges against human rights defenders. Overall, her case has benefited from broad publicity and has been covered by many NGOs and the Mexican OHCHR office, whilst at least 300 Organisations have joined the Amicus Curiae submitted for her trial.

‘We came to Geneva to advocate for the respect of the rights of indigenous communities, who are amongst the key stakeholders, and the main victims, of business and human rights issues. And we do have concrete demands.’

Bettina Cruz and other indigenous defenders from South America gathered to participate in the Business and Human Rights Forum which is held annually in the Palais des Nations in Geneva. They feel their presence is important and spreads the message that indigenous communities will do whatever is in their hands to raise awareness on their vindications. Bettina, during her intervention in one of the Panels organised, highlighted the importance of the Right to a Free, Prior and Informed Consent, which must be reinforced through strong laws and their sound implementation. ‘Consultations are not valid when they are mere tools of simulation’ she explains, ‘I only see consultations that are carried out once the company is already installed, or without the participation of civil society observers, and this does not follow international standards’. She points out that the United Nations Declaration on the Rights of Indigenous Peoples and the recommendation from the UN Working Group on business and human rights are the minimum standards that States should follow, but that it is imperitive that States also ensure that enough measures for the protection of human rights defenders are taken.