Next week the UN General Assembly will vote on Third Committee resolutions on the human rights situations in four countries including Iran and Syria. By profiling the experience and analysis of a human rights defender from each country, ISHR aims to highlight the grave risks defenders face in carrying out their work, and why the General Assembly must continue to demand and act to secure their protection. ISHR has also previously profiled defenders from the Democratic Republic of Korea and Myanmar, the other two countries the subject of a GA resolution. 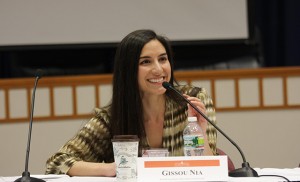 The International Campaign for Human Rights in Iran is an independent, nonpartisan, nonprofit organization dedicated to the protection and promotion of human rights in Iran.

The Campaign investigates and documents human rights violations occurring throughout Iran, relying on first-hand accounts to expose abuses that would otherwise go unreported. We bring these violations to the attention of the international community, through news articles, briefings, in-depth reports, podcasts and videos, and work to build support for human rights inside Iran as well. The Campaign engages in intensive outreach and international advocacy aimed at defending the fundamental rights and freedoms of the people of Iran and holding Iran accountable to its human rights obligations.

What is the situation for human rights defenders in the country?

The situation for human rights defenders in Iran continues to be a stark one.

In the early 2000s, with the tenure of reformist leaning President Khatami, there was at least an opening for civil society to establish groups dedicated to women’s equality, cultural rights, children’s rights and other social issues.

Unfortunately, after President Mahmoud Ahmadinejad came to office in 2005, there was an almost immediate shift in attitude and a serious crackdown on civil society activists in the form of targeting, intimidation and arrests, including the closure of leading human rights groups like the Defenders of Human Rights Center, established by five prominent human rights lawyers, among them Nobel Laureate Shirin Ebadi.

The stifling environment for NGOs came to a head with the disputed presidential elections of June 2009. In the aftermath of the elections, during which hundreds of thousands of protesters peacefully took to the streets of Tehran and other major cities throughout Iran to demand a recount of the vote, security forces responded by violently dispelling protests and subsequently rounding up known civil society leaders and activists for their alleged role in these events.

The crackdown had a chilling effect on civil society—with activists facing the unappealing choice of going to jail or fleeing the country.

This restrictive environment continued without respite until the election of President Hassan Rouhani, who pledged to usher in badly needed social and cultural reforms after taking office in August 2013.

Initially there were some promising signs, including the release of dozens of jailed high profile political and civil activists in September 2013, among them the renowned human rights lawyer Nasrin Sotoudeh.

Unfortunately, more than one year into Rouhani’s presidency, the reality has fallen far short of expectations. Human rights lawyers such as Abdolfattah Soltani and Mohammad Seifzadeh, student activists like Bahareh Hedayat, Majid Tavakoli and Zia Nabavi, and dozens of other civil society leaders remain behind bars for nothing more than peaceful activities.

The recent crackdown on the public outcry in response to the acid-throwing incidents in Isfahan—where in the course of a month dozens of Iranian women were targeted by unknown assailants and had disfiguring acid thrown on their faces and person—is a further demonstration of the continuing oppression in the Islamic Republic and stifling of any popular protest.

The news of these incidents prompted a public outcry from both men and women and resulted in a protest outside the Iranian parliament building calling on the authorities to undergo a swift investigation into these events.

However, rather than focus on bringing the perpetrators of these criminal acts to justice, the Iranian authorities invested their energies into arresting those accused of organising these protests outside Parliament, including noted women’s rights and students’ rights activist Mahdieh Golrou and journalists who reported these events.

In short, if activists peacefully protesting the violent disfiguring of women’s faces are not even protected from arrest and prosecution then what does that say about the risk that civil society faces as a whole in today’s Iran?

What is your assessment of the UN’s response to the human rights situation in Iran, and what steps would you like to see taken?

Through its public statements the Islamic Republic relentlessly seeks to reduce the importance of these resolutions and dismiss them as “politically motivated” instruments pushed by Western nations. But the reality remains that the text of the resolutions is supported not just by North American and European states, but by a broad coalition of African, South American and Asian UN member states as well. The voting records speak louder than the Islamic Republic’s rhetoric.

As for the utility of UN mechanisms, the importance of these procedures should not be understated. A recent example of where engagement from UN bodies and the pressure of the international community has been effective on human rights issues in Iran is with respect to executions for drug-related offenses. For the past decade, Iran has been the global leader in executions per capita, the overwhelming majority of which are for drug-related offenses. In response to this concerning trend, the UN Special Rapporteur on Human Rights in Iran, Dr. Ahmed Shaheed, and other UN experts have issued joint statements calling on the Iranian authorities to cease the practice of executions for drug-related offenses, which do not fit the definition of the “most serious crimes” for which the death penalty can only be meted according to international law.

While until as recently as last March the position of the Islamic Republic on this issue had remained defiant, now Mohammad Javad Larijani—the head of the Iranian Judiciary’s Human Rights Council—has indicated that a change in the death penalty laws for drug-related offenses might be near.

So this softening of the Islamic Republic position demonstrates that sustained pressure from UN member states can bring about positive reform.

Given that on most other indicators, among them freedom of expression, women’s rights, elimination of torture and cruel and inhuman treatment and religious freedom, among others, the Islamic Republic has shown little to no improvement over the past year or even regression in some cases, further engagement by the United Nations is needed.

The UNGA resolution on human rights in Iran is comprehensive in scope but one group of human rights defenders whose protection cannot be emphasized enough is that of human rights lawyers. Right now, renowned human rights lawyer Nasrin Sotoudeh is challenging the decision of the Iranian Bar Association to suspend her legal license, while her colleagues and fellow co-founders of the Defenders of Human Rights Center, Abdolfattah Soltani and Mohammad Seifzadeh, remain behind bars. These individuals were targeted solely for their representation of clients in politically sensitive cases, including political and civil activists, religious minorities and members of other marginalised groups. When not only the defenders of human rights—but the very defenders of those defenders—are targeted for arrest and imprisonment, this is a strong indication of a broken system.