Good morning, Alicia.
The year is 2050. What does the world look like – in particular for women, Black people, LGBTI people?

We are making strides toward equality and we are centered in all decision-making processes. We are protected and respected. It is a norm for us to be in positions of leadership. Diversity is expected. We are as safe at night as anyone is during the day. We have access to education, healthcare, food, and housing. All of our needs are met. Redistribution of wealth is in progress. Our survival is not dependent on or propping up the capitalist system. We are defining justice for ourselves. We recognise ourselves as the source of our own healing.

How did your work help achieve the vision you just described? 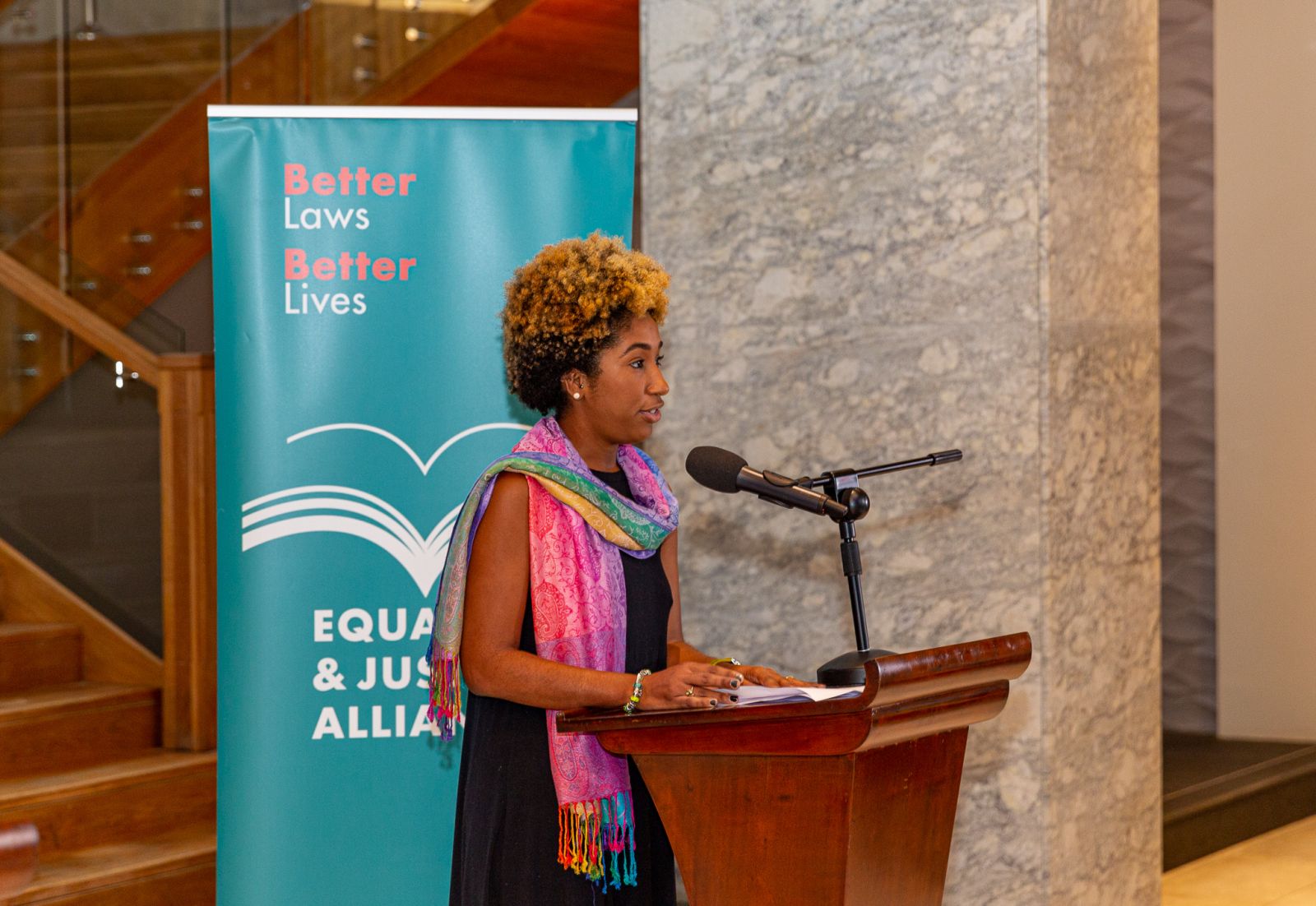 My work provoked conversation. It made information, from academic theory to changemaking methodologies, accessible to everyone. I created spaces where people have been comfortable to question, critique, challenge, learn, share, and create. I developed tools for all of us to be able to think outside of the reality we used to know. We knew we were not bound to it because I put significant emphasis on imagination and future-making. I found a way to fight the injustice we faced and facilitate collaborative visioning, imagining, and creating. We channeled our rage, weaponised hope (inspired by the work of artist Angelika Wallace-Whitfield), and we came together to co-create the futures. I helped to create tools and systems to enable that practice.

Was there a defining moment in your life that motivated you to defend human rights? 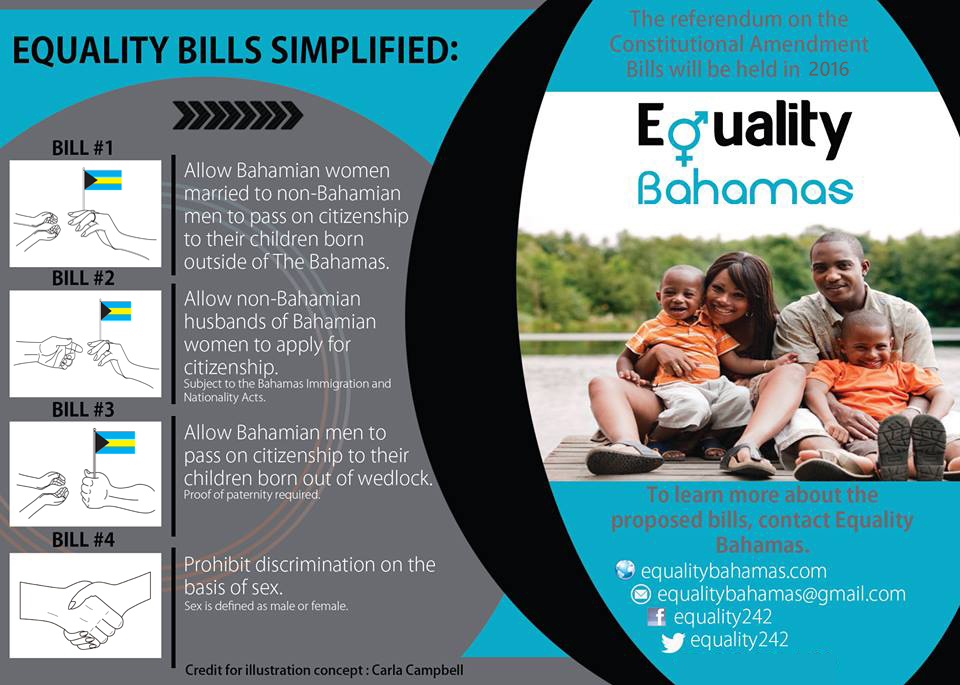 I am a queer Black woman. I have student loan debt. I am unwaged. I am a survivor of violence. My life is a collection of moments that make it necessary for me to defend and promote human rights if I am to survive and leave the world better than I met it. Perhaps what prompts me to action is recognition of another important fact—I have privilege. I have had experiences I may never speak of, and I know that my circumstances could be a lot worse. It is important for me to use what I have to help us all get what we ought to have had a long time ago. For me, the defining moment happens over and over again, when I feel rage threatens to control my body, and I remember to be hopeful, not because it feels good or because I am waiting for something to happen on its own, but because I believe in my own power and the magic we create when queer people, Black people, women come together to turn channel our rage, righteous and raw, into sustained action. 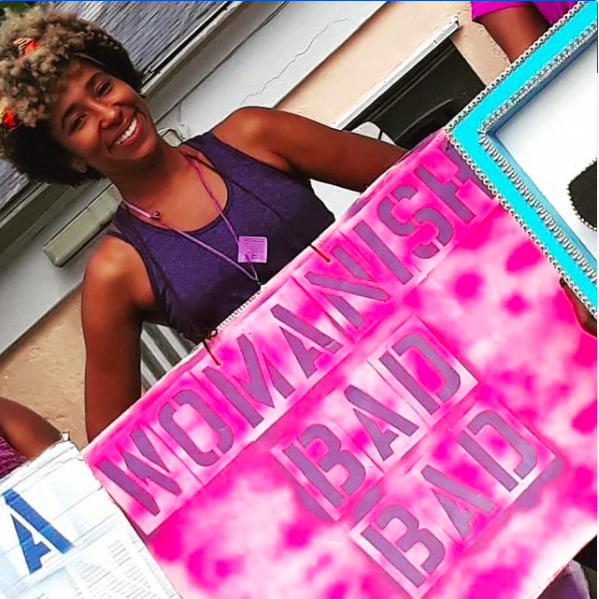 Do you face any threats and attacks because of your work?

I’ve been experiencing rape and death threats for the past six years. Most of it has been online. The most troubling threats come following participation in direct action or agitation from people in positions of influence. In 2018, when I participated in the 71st session of the Committee on the Elimination of Discrimination against Women (CEDAW) in Geneva, a radio personality made dangerous statements about me on the air. The same person incited the first threats of violence against me in 2014, so I knew I needed to take it seriously. I made a report to the CEDAW focal point on reprisals, but the outcome was not favorable. A government representative called me to suggest I report the incident to the police, but did not offer support in doing so and could not cite an offense, according to Bahamian law, that I would be reporting. It was a ridiculous suggestion that gave me no help. The government, of course, reported its “action” to the UN, even claiming that I said I no longer felt unsafe. I told the focal point that this was untrue and that, at the very least, the government should have been instructed to publicly state its support for human rights defenders, enact hate speech and hate crime legislation, and direct the radio personality to cease and desist all reference to me and any other human rights defenders. It would have cost the UN nothing to support me and other human rights defenders by making these recommendations to the government. Instead, I am left to fend for myself in a place where I continue to live and work without protection, legal or otherwise. 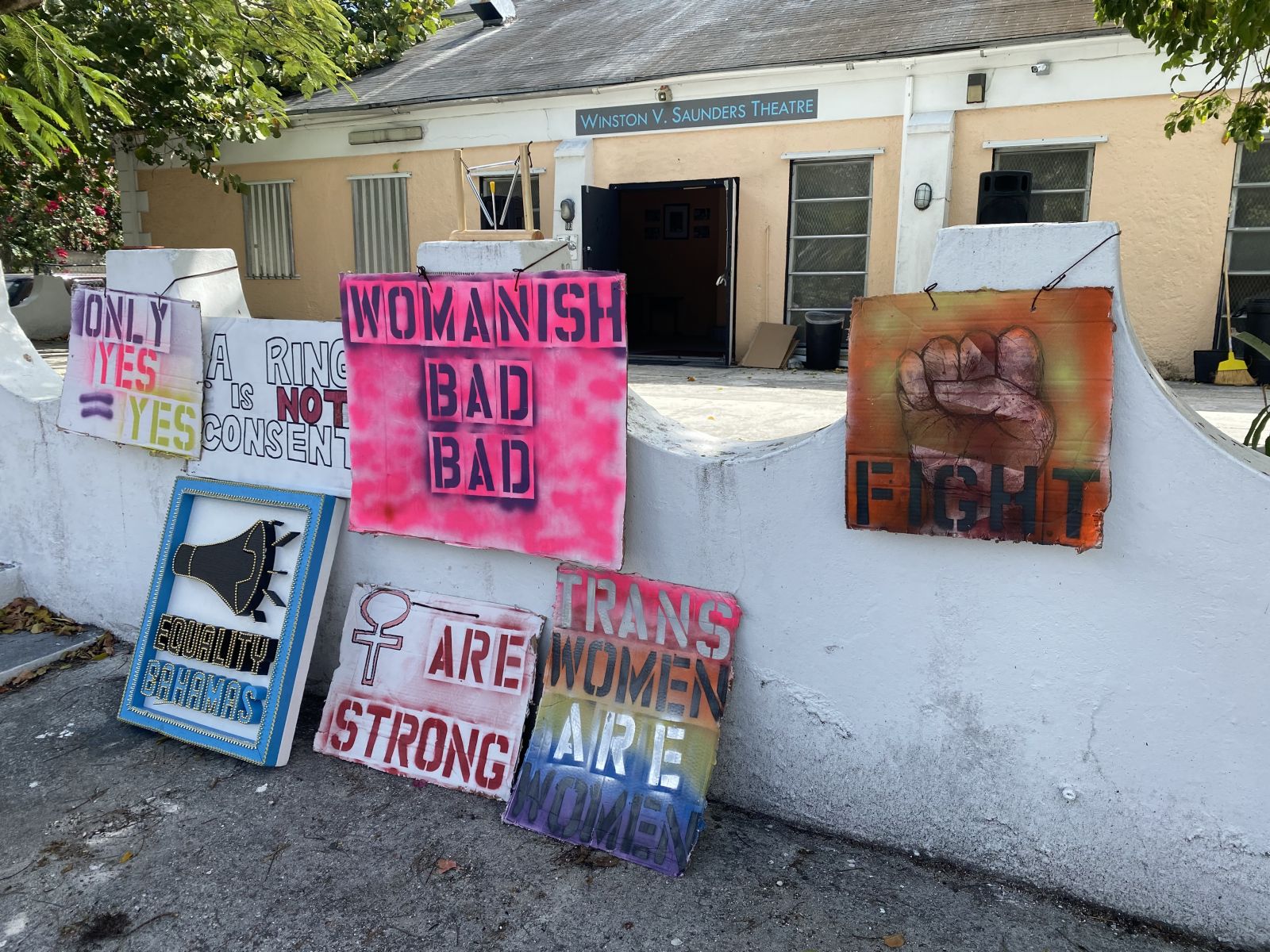 What could be done for you to be able to work safely and effectively?

Institutions and people in positions of power need to rebuke violence, harassment, and threats of violence. The State needs to enact legislation against hate crimes and hate speech. It needs to publicly state its support of human rights defenders, make it clear that the relationship between itself and advocates is complementary, not adversarial, and assert that it will protect us. The United Nations and other bodies in control of international mechanisms and reporting processes need to take responsibility for the safety and security of the human rights defenders it depends on to monitor and evaluate State action. These organisations need to raise the bar, calling States to higher standards. They have to make it clear to States and the general public that the safety and security of human rights defenders are a matter of priority before we are detained, disappeared, or murdered. 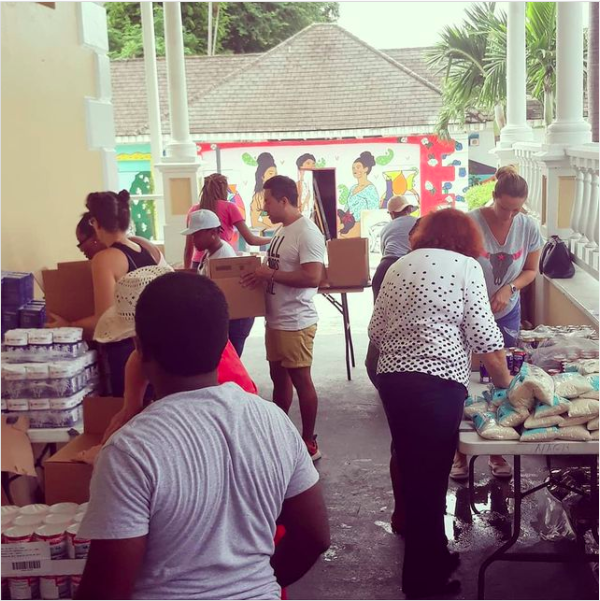 How has the Covid-19 pandemic affected your work?

It has, as predicted, increased the volume of work. People, especially vulnerable people, are suffering. The pandemic has created crisis after crisis, from domestic violence and unpaid care work to unemployment and disruption of education. In anticipation of the effects of COVID-19 and State actions in response to it, Feminist Alliance for Rights (FAR)—where I am a steering committee member—produced guidelines for feminist policymaking during this time. This is one of the most critical pieces of work I have contributed to this year. In addition, I have been engaged in rapid response, working on policy recommendations to end gender-based violence, and continuing the regular programming of Equality Bahamas. It has been a busy year, but one of learning and where I have been able to see and strengthen my own agility. Human rights defenders have to be able to anticipate, prepare, respond, pivot, assess, and revise at all times, and especially during the crisis. The work has intensified and been taxing, but I believe that we have learned more this year than we have in years gone by, people are more aware of inequalities, and in addition to getting more people on our team, we can get institutions to make substantive change.

You are the producer of a monthly newsletter called The Culture RUSH. How does fusing pop culture with social justice help achieve your vision?

I want people to understand the movement for justice and equality. I want to see a broader understanding of feminism, women’s rights, LGBTQ+ people’s rights, and the importance of centering vulnerable people in decision-making processes, programmes, and activities. We need more people on our team. That requires two main actions: communicating in clear, accessible ways, and meeting them where they are in order to deliver the message. Academic text, feminist theory, and the language of institutions and advocacy are not as appealing or accessible as pop culture. People know what’s going on in Cardi B’s marriage, Megan Thee Stallion’s friend group, and the lives of real housewives. If WAP gets us talking about women’s pleasure, let’s talk about women in rap, lyrics, and music videos. In The Culture RUSH, I make connections between pop culture and social justice. In January 2021, I am starting Scorch, a paid subscription newsletter breaking feminist theory and academic text down into digestible bites (similar to Blinkist). I’m excited about making human rights and social justice accessible and interesting to wider audiences. When people are interested, they’re more likely to get invested, and when they’re invested, we can convince them to take action with us. People power is how we win. 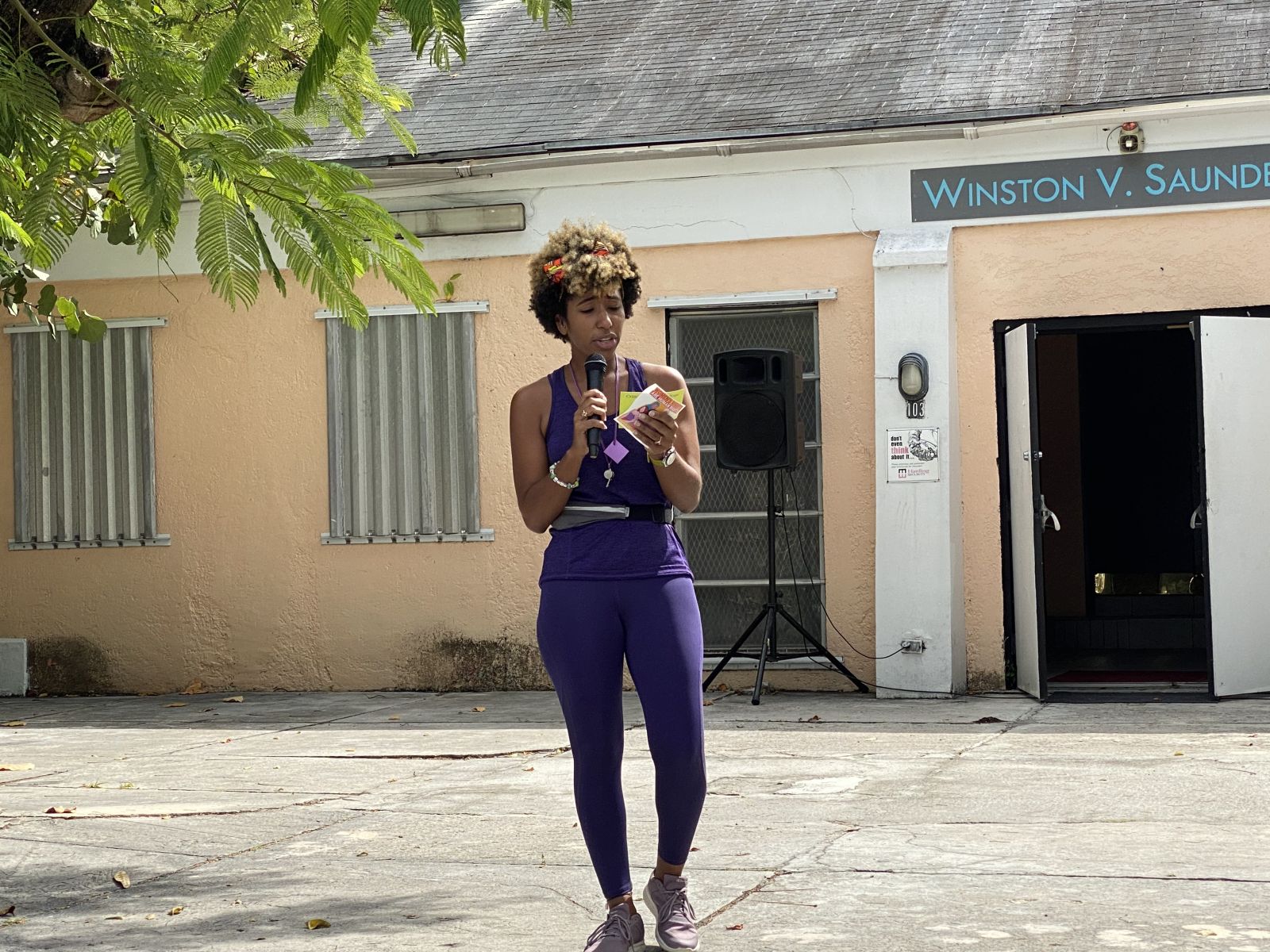 Alicia A. Wallace is a queer Black feminist, gender expert, and research consultant. She is the Director of Equality Bahamas which promotes women’s and LGBTQ+ rights as human rights through public education, community programming, and advocacy. Her work has included a two-year educational campaign ahead of a national referendum on gender and citizenship, the design and coordination of Women’s Wednesdays—a month event series bringing women together to share knowledge and ideas—and management of a disaster relief donation and distribution center. Alicia is also a steering committee member of Feminist Alliance for Rights (FAR). She has a weekly column on social and political issues in the Bahamian daily newspaper The Tribune and has published academic papers.