Costa Rica’s President Carlos Alvarado Quesada announced his country’s candidacy for membership of the Human Rights Council – the world’s premier human rights body – this morning. This throws open the election for seats on the Council for States from the Latin American and Caribbean region. 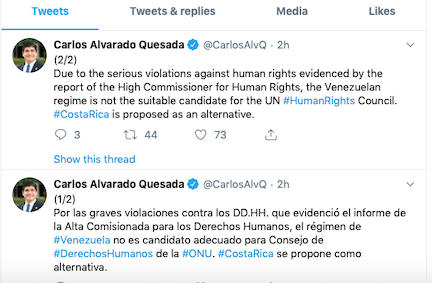 ‘This is really good news,’ said ISHR’s Eleanor Openshaw, ‘It is the result of sustained advocacy by Venezuelan human rights defenders who have demanded States take position in favour of the respect of human rights in the country’.

Criticism of Venezuela’s human rights record has been increasingly evident. 54 States no longer recognise the Maduro administration. This includes most members of the Lima Group – a group of mainly Latin American States – who have been key in driving forward initiatives within the UN system to hold Venezuela to account. This includes the recent decision by the Human Rights Council to establish a fact-finding mission to Venezuela.

To this point only two candidates from the Latin American and Caribbean regional group – Brazil and Venezuela – had put themselves forward for the two seats available on the Human Rights Council.

In an event held yesterday in NY on international responses to the human rights situation in Venezuela, Openshaw spoke to the need for the group to challenge Venezuela’s candidacy. She reminded the regional group that there was still time for another candidate to put themselves forward before the election on the 17 October, and that there were pressing reasons for the group to do so.

‘Venezuela’s human rights record – made evident in 2019 OHCHR report on Venezuela – is dire,’ Openshaw said. ‘The standards for membership of the Council demand that States uphold the highest human rights standards. Venezuela clearly doesn’t come close to this.’

OHCHR reported on ‘grave violations of economic, social, civil, political and cultural rights’ in the country, and stated that over the last decade – and especially since 2016 – the Government and its institutions have implemented a strategy ‘aimed at neutralising, repressing and criminalising political opponents and people critical of the Government.’

In ISHR’s evaluation of all Human Rights Council candidate States’ record of cooperation with the Council and other UN bodies and support for civil society, Venezuela fails on 14/15 counts.

‘Membership of the Human Rights Council matters. Costa Rica stepping forward is an important signal of the need to uphold standards and fight for the credibility of the UN’, said Eleanor Openshaw. ‘In that regard, we hope their candidacy gains support from UN General Assembly members.’

The other candidate on the regional group’s slate, Brazil, has also been much criticised, including by leading Brazilian NGO Conectas Direitos Humanos.

The General Assembly elections for membership of the Human Rights Council will be held on 17 October in New York. Candidates need 97 votes (out of 193) to be elected.

To follow the elections at 10am NY time, 17th October see: http://webtv.un.org

In Africa, more and more defenders are working in an environment marked by the shrinking of civic and democratic space and severe restrictions of fundamental freedoms, especially during pre- and post-electoral crisis and more recently the fallout of the health crisis linked to Covid-19.