Read the report From Restriction to protection.

(Geneva) – All States should develop and implement specific laws on the protection of human rights defenders and conduct a comprehensive legislative audit to repeal laws which criminalise their work, according to a major new report released by the International Service for Human Rights today. 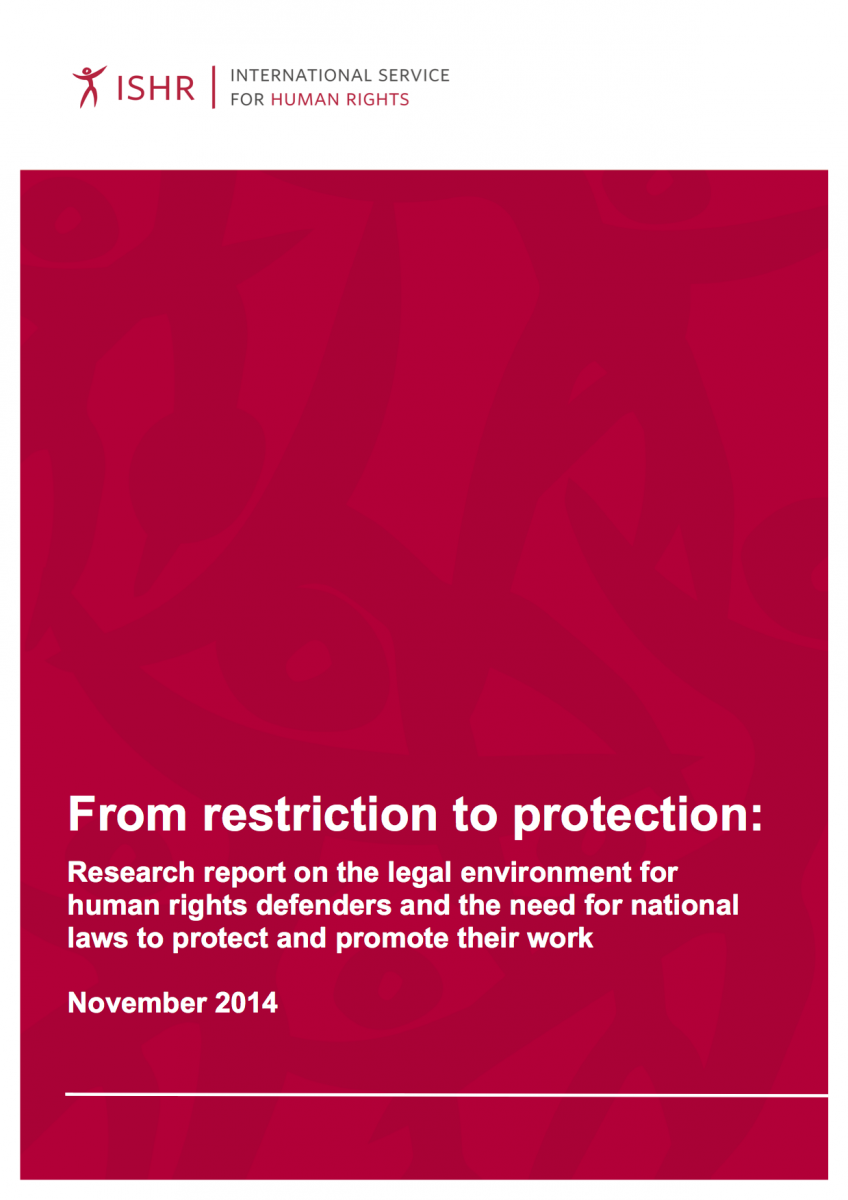 The report, which examines the operation of laws affecting human rights defenders across 40 jurisdictions covering all regions, found that while there is a proliferation of laws which unduly restrict or criminalise the work of human rights defenders, there are also increasing examples of good practice, although only a very small number of States have taken the step of incorporating the Declaration on Human Rights Defenders into national law. The report is also available in Spanish.

‘It is regrettable that despite repeated calls by international and regional human rights experts, to date only Colombia, Côte d’Ivoire and Mexico have enacted specific laws on the protection of human rights defenders. We call on those States to ensure effective implementation of these laws and for other States to follow their lead,’ said ISHR Director and report author Phil Lynch.

The report notes that, in the course of the Universal Periodic Review, almost twenty States, the vast majority of them from the European Union, have recommended to other States to enact a human rights defender law without adopting such laws themselves.

‘States such as Ireland, Norway and Switzerland should ensure that the leadership they show on the protection of human rights defenders abroad is reflected in their national laws,’ Mr Lynch said.

According to the report, ‘specific laws on human rights defenders could assist not only to provide formal legal protection to their work, but also to give official recognition to the legitimacy of such work, educate law enforcement officers, public officials and the public at large about the importance of defenders and the protection thereof, and be a source of support and inspiration to defenders themselves both inside and outside the country concerned.’

In addition to providing guidance as to the consultative process for developing a human rights defender law, the report also advises as to the key provisions of such a law, recommending that it:

The law should also include provisions to:

In addition to recommending and giving guidance as to the development and enactment of a specific human rights defender law, the report also contains 25 concrete recommendations to States to give legal force and effect to the Declaration on Human Rights Defenders through legislative provisions in other areas, ranging from penal codes to tax law.

The report also found that while examples of good practice can be found in most regions and many States, examples of laws which restrict or criminalise the work of human rights defenders in a manner that is incompatible with international human rights law can be found in all regions and in all States. Such laws range from counter-terrorism laws in Australia and Ethiopia, to NGO laws in China and Kenya, to public assembly laws in Egypt and Myanmar, to laws regulating journalists and freedom of expression in Italy and Russia. The report includes a checklist to assist States to identify and reform such laws.

‘A conducive legal environment that protects and enables the work of human rights defenders, and which does not unduly restrict or criminalise such work, is vital for democracy, development and the rule of law,’ ISHR’s Phil Lynch said.

The report was prepared with the pro bono support of five of the world’s leading law firms – Allens, Debevoise & Plimpton, DLA Piper, Reed Smith and Simmons & Simmons – with the findings and recommendations underpinned by over 2,500 pages of professional legal research. The governments of Ireland and Liechtenstein provided financial assistance for publication of the report.

The report was launched at an event at the Palais des Nations in Geneva with Sir Nicolas Bratza (former President of the European Court of Human Rights), Reine Alapini-Gansou (Commissioner with the African Commission on Human and Peoples’ Rights) and Maryam Al-Khawaja (Co-Director of the Gulf Center for Human Rights).

The event also involved the launch of a high-level legal advice prepared by Sir Nicolas Bratza, together with Professor Egbert Myjer and leading international law firm Freshfields, on the legal obligations of the Human Rights Council, its President, Bureau and Member States to protect against and promote accountability for intimidation and reprisals against human rights defenders and others who cooperate or seek to cooperate with the Council and its mechanisms.

Human rights defender Mohamed El-Baqer must be released immediately and unconditionally, stated 19 human rights organisations. His detention is arbitrary, aimed at punishing him for his legitimate human rights work and is only putting his life and psychological well-being at serious risk.

Women journalists and protesters are doing a vital work to advance democracy and human rights in Sudan. They should be supported but instead, State police attacks and intimidates them. This must change!