For many victims and activists, the Human Rights Council is a critical arena to confront abuses of power and push for change in their countries. Its success depends on members and their commitment to promote and protect human rights at home and abroad. Every year in October, the UN elects new members to the Human Rights Council. In 2021, 18 candidates ran for 18 seats. None of them had a perfect human rights record: they all needed to do better.

ISHR campaign for the 2021 elections is now over. On 14 October 2021, UN member States elected members to the UN’s top human rights body, the Human Rights Council, for the 2022-2024 term. The 18 candidates were elected, leaving civil society disappointed in a process that can hardly be called an election. Read our analysis of the election by clicking on the button below. 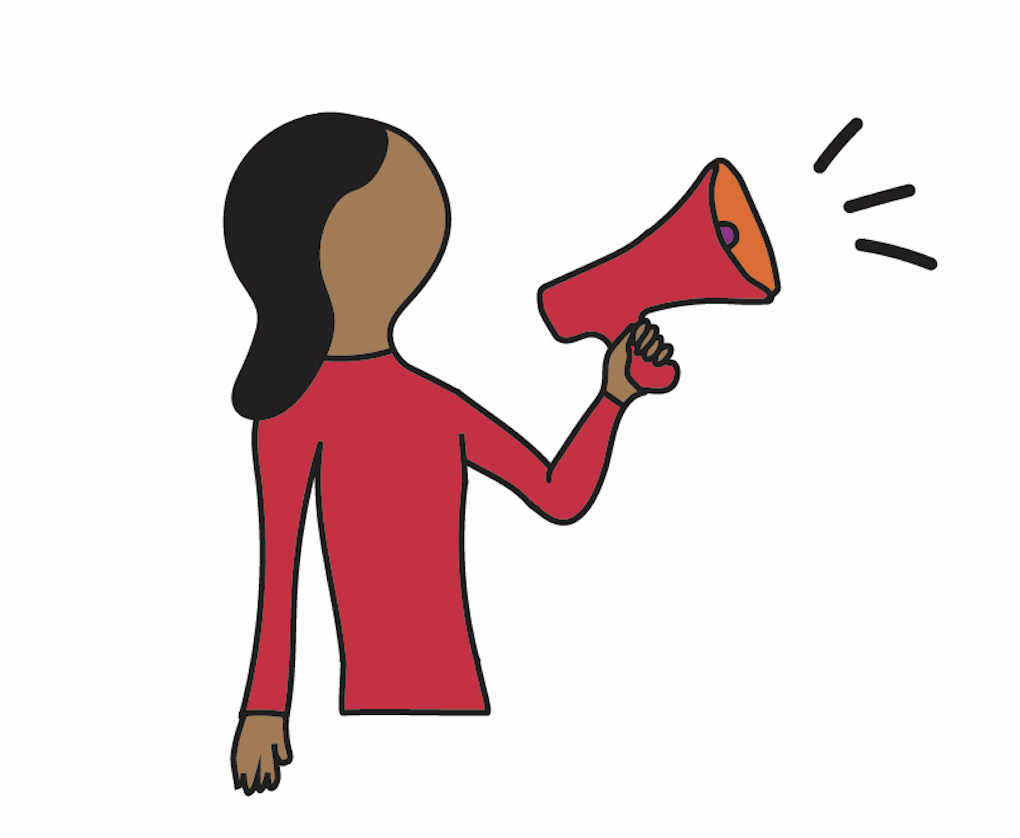 Our work is not over yet!

We will continue to call for competitive and transparent elections!

What did we want?

We wanted all candidates to make voluntary pledges in which they commit to improve their human rights records and their collaboration with the Council. We also wanted UN member States to make informed votes and not vote for Stats that do not uphold the highest standards in the promotion and protection of human rights, and do not fully cooperate with the Council.

What did the campaign achieve?

We increased the transparency of the election. ISHR published scorecards that gave a brief overview of the candidate’s record of cooperation and engagement with UN mechanisms. These scorecards helped UN member States cast informed votes.

We also created spaces where civil society and States could engage with candidates about their records and candidacies. On 8 September 2021 the Human Rights Council pledging event took place, and it was a success! 10 of the 18 candidates for Human Rights Council membership participated in the event to elaborate on their pledges, confirming their commitment to transparency and dialogue with civil society. It was great to see over 200 diplomats and civil society participants attend the event. Altogether the audience sent over 100 questions to the candidate States. As many as we had time for were asked and responded to during the event. The rest were sent to each candidate in letters. This contributed to encourage candidates to publicly commit to strengthen their human rights records and their cooperation with the UN. By 14 October, 15 of them had published voluntary pledges.

Disappointingly this year, despite our joint call for competitive elections, the number of candidate States was equal to the number of available seats; meaning that all candidates ultimately got elected. Interestingly, Eritrea, UAE, Honduras and USA each received the lowest number of votes of actual candidates for their region, which seems about right applying HRC membership criteria of upholding human rights and cooperating with the UN. This again demonstrate the importance of having competitive slates. You can read here our full analysis of the elections.

ISHR will continue to call on all regional groups going forward to ensure, as a matter of principle, competitive slates; to encourage more States to present their candidacy; for all candidates to announce their candidacies with sufficient time for voting States and civil society to properly consider their candidacies; and in voting, for all States to commit to making human rights paramount in Council elections, rather than political considerations.

If you want to know more about the Human Rights Council please check out this video:

Roughly a third of the members change each year. Elections take place every October in New York.

The members are elected by the 193 states in the General Assembly. Candidates are expected to put forward voluntary pledges and commitments on what they will achieve as members. This should inform the decision of other States to support them in the elections.

Countries are not obliged to vote for all of the candidates. They can still not vote for a candidate country. They should vote with reflection, not in haste or in exchange for favours or political influence. They should only vote for the most committed candidates.

The countries elected will serve three-year terms beginning on 1 January 2022.

This year 18 countries are running for 18 seats:

Candidates must be member states of the UN. Through membership of the Council, they commit themselves to “uphold the highest standards in the promotion and protection of human rights,” and to fully cooperate with the Council and its mechanisms.

None of the candidate countries has a perfect human rights record: all need to do better and can do so by working with civil society, including by developing time-bound pledges and commitments on what they propose to achieve.

10 of the 18 countries running for election to the UN Human Rights Council have engaged in intimidation or reprisals against human rights defenders cooperating with the UN. 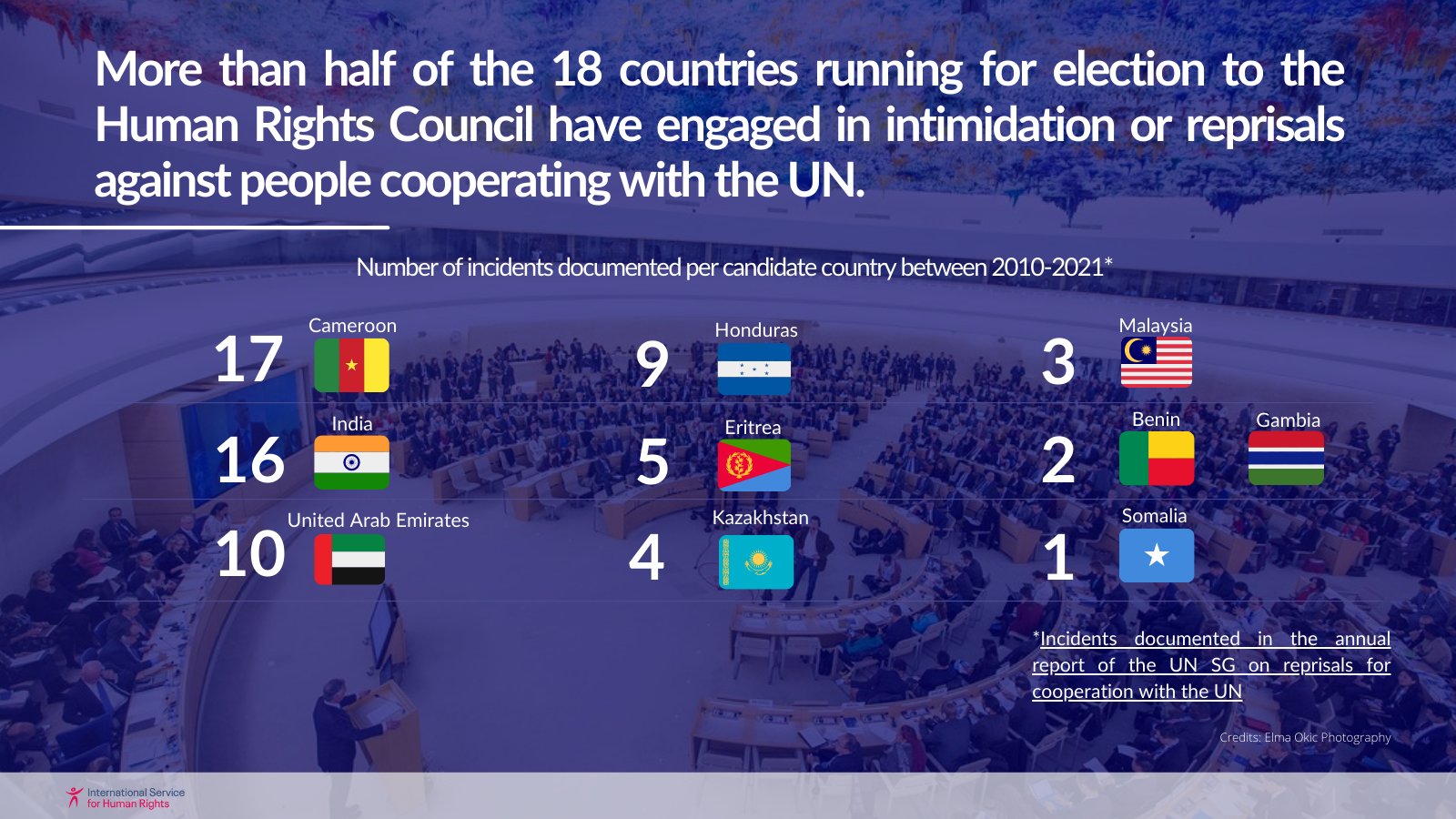 ISHR has also published ‘scorecards’ for States seeking election to the UN Human Rights Council for 2022-2024  to help inform voting States’ decisions in the upcoming election.

We want elections to be more competitive (for instance we sent letters with other NGOs this year calling regional groups to each nominate more candidates so the slates would be competitive). We also want all candidates to commit to improve their human rights records and UN member states to vote only for the candidates that fulfil the Human Rights Council membership standards.

Disappointingly this year, despite our joint call for competitive elections, each regional group presented a ‘clean slate’, where the number of candidate States is equal to the number of available seats (meaning that all candidates will ultimately get elected). However, we can still make a difference by influencing the number of votes received by each candidate, which can  provide an indication of their legitimacy as a Human Rights Council member.

Civil society can engage in several ways in the human rights council elections.

→ If your country is a candidate: send them a message on Twitter using #HRCelections2021 and calling on them to publicly commit to improve their human rights records and enhance their collaboration with the Human Rights Council.  If you prefer, here is a pre-prepared tweet with this message to all candidates: https://ctt.ac/88VAD

→ If your country is not a candidate, call on your government on Twitter or by email to NOT vote for any candidate State that does not uphold the highest standards in the promotion and protection of human rights and does not fully cooperate with the Council. By doing so, you might influence the number of votes received by each candidate and this can provide an indication of their legitimacy as a Human Rights Council member. Candidate States must still secure at least a two-thirds majority of all voting States to obtain a seat at the Human Rights Council. Download the twitter handles list here. You can also find the emails of country missions to the UN in New York here so you can reach out directly.

For more ideas, check out the video created by our HRCNet coalition which explains the importance of the election and how civil society can participate: 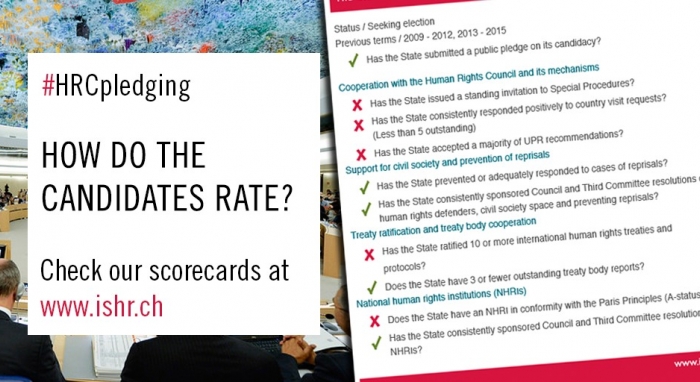 Check out how the candidates seeking election to the UN Human Rights Council for 2022- 2024 rated. 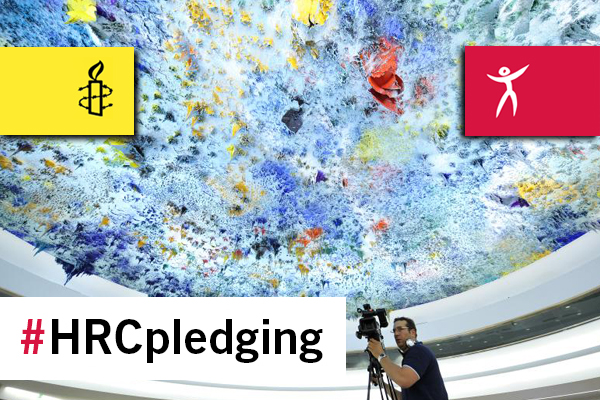 10 candidate States publicly spoke to an audience of around 200 people on their pledges as incoming Human Rights Council members for 2022 – 2024. They also faced questions on pressing human rights issues from both States and civil society organisations. 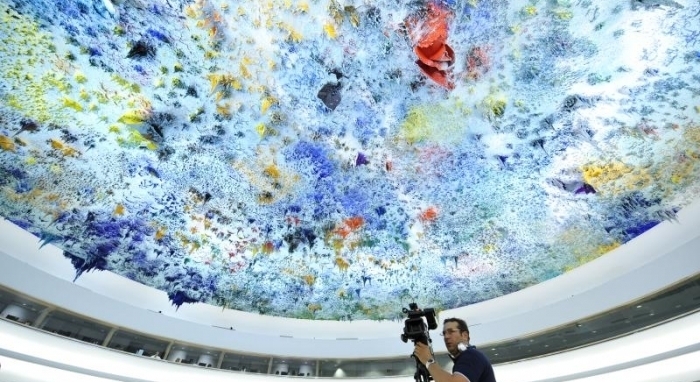 Read our blueprint for States to ensure the Human Rights Council continues to be credible, effective and accessible in 2021.

Download our campaign toolkit to understand at a glance how the election works and to support raising awareness about this important event.

Join our email list to receive the latest updates on the elections and the Human Rights Council.