The Human Rights Council has extended the mandate of the Commission of Inquiry on Burundi. Disappointingly, the Council failed to take a strong stand on the issue of Burundi’s Council membership. This is despite evidence of crimes against humanity perpetrated by government officials and supporters as well as the country’s flagrant refusal to cooperate with the UN to investigate or pursue accountability for such egregious crimes.

‘Should the independent commission of human rights experts mandated by the Human Rights Council to investigate on possible gross violations in Burundi, and who managed to collect over 500 testimonies of victims and present a report despite being denied access to the country, continue investigating or not? Or should it stop right here after having shown that there are reasonable grounds to believe that crimes against humanity are being committed in the country?’ This question summarises what was really at stake in the resolution proposed by the European Union (EU) group.

It was a question which only 22 out of the 47 Council members gave a clear ‘yes’ to. Thankfully, given abstentions, this was enough for the resolution to pass and the Commission of inquiry (COI) to be renewed. This was a positive outcome, for while calling for investigation and accountability seems to be the least the Council could do for Burundian victims and their families, that minimal baseline was unceasingly attacked throughout the session by Burundi and its allies.

The struggle started with, of course, requests for amendments on the draft resolution, whose original version called for, inter alia, the General Assembly to take up the case, and the International Criminal Court to also open an investigation. Amendment negotiations are part of the diplomatic game so they are almost always expected, even more when it comes to country resolutions. No one likes to be singled out nor see their ‘friends’ be. We get that.

Yet what was less expected, if not unprecedented, is that, despite compromises being made on the EU side to water the resolution down, Burundi simply stepped out of the negotiations process. Subsequently it came up with a ‘counter resolution’ which they presented no earlier than two days before the vote, thus making serious and inclusive negotiations barely impossible.

This new resolution, officially presented by Tunisia on behalf of the African Group, made no call whatsoever for investigation on suspected ‘crimes against humanity’. It was subsequently voted upon and adopted by the Council where Burundi seems to have made very trustworthy friends. Bright side of that new resolution: the call for ‘a team of three experts’ to be dispatched in the country by the High Commissioner which, with the COI’s existing three members, makes six experts following up the situation closely. Down side of the situation: half of these six experts, in addition to not being called ‘independent’, are explicitly required to ‘forward to the judicial authorities of Burundi’ all information they will collect.

So in a context of ‘pervasive impunity (…) aggravated by a judiciary lacking independence’[1] where ‘defence and security forces have been the principal perpetrators of human rights violations’[2], all findings regarding violations most likely committed by the latter, should be first sent to (and quite logically filtered by) the former. A plot twist so ludicrous that even the Burundian delegation (who of course warmly welcomed the African Group resolution) created a hashtag for it : #Twenga, which means ‘laugh!’. The hashtag has been retweeted countless times so far by supporters of the Burundian authorities who are certainly sipping tea at the moment while watching the Council drowning in its own contradictions.

This should be a lesson to remember: toning down legitimate queries when facing serious and massive human rights violations does not help keeping blatant violators engaged in negotiations process. Nor does passing accommodating human rights resolutions lead them to at least make amends and show remorse. It creates the exact opposite of what was hoped for: a sentiment of endorsement for perpetrators and another blow in the face of victims. References to the International Criminal Court were removed from the EU text, ‘progress’ made by the country was welcomed, but still Burundi slammed the door of negotiations and got what it wanted from the Council. Or at least half of it. Thanks to EU leadership at the Council, however, the COI is safeguarded.

Aside from usual political and strategic alliances, it is clear that what caused Burundi to make such a bold move and succeed at it was its very seat at the Council. This helped them if not gain wider and open support, at least face feeble opposition and even less calls for accountability. One proof of that: the high abstention rates observed on both votes. Given the gravity of the situation, it is unfortunate that these countries who obviously do not lean towards Burundi’s side, still did not find the courage to clearly confront them, thus putting the very future of the COI at risk.

Voting at the Council is both a huge responsibility and an incredible soft power tool for members, as trading votes in view of future examinations is a common (and regrettable) practice among them. With that in mind, the Council should therefore pay even closer attention when selecting members and try as much as possible not to open its door and hence give carte blanche to those with the shadiest human rights records. Even more, the Council should monitor its members throughout their membership and make sure that they all ‘fully cooperate with [it]’ as stated in the General Assembly resolution 60/251[3].

This has unfortunately not been the case so far with Burundi as the ‘resolution drama’ is actually the latest (but probably not the last) episode of a lengthy series of defiant acts towards the UN system. Burundi has indeed declared persona non grata three other UN independent experts; interrupted its examination by the Committee against Torture by simply not showing up at the last part of it to answer the Committee’s questions; refused all collaboration with the COI experts, etc. Such attitude is clearly incompatible with the status of Council member and has not been met so far with the legitimate reaction it calls for.

If not adequately addressed, Burundi’s situation at the Council after worsening of the situation on the ground and utter lack of cooperation would set a gloomy precedent that could actually inspire other massive violators currently sitting at the Council or aspiring to in the future. If it wants to remain the credible top UN human rights body it still represents for civil society, human rights defenders, victims of violations, but also perpetrators themselves, the Council has to send a clear message: that it won’t tolerate such attitude from its members.

Suspending Burundi without further delay seems like the logical response given that enough time has now been spent trying to engage with the country. Enough time has been spent for victims of violations to wait and see the international community seize the gravity of what they are going through and openly take their side without trying to accommodate perpetrators. Though the final decision to suspend a Council member belongs to the General Assembly, the Council still has the power to recommend it, as it did for Libya in 2011[4]. And honestly, what makes Burundi’s case so different than the Libya one?

If the Council does not take that decision on its own initiative, it is the whole international community’s responsibility, civil society included, to make sure that they consider it, and remember that they too are being closely watched. We all should remember that yes the COI was renewed and it is a great step, but that victory was won on a razor’s edge. The very same edge on which the credibility of the Council and the UN is sitting if they do not speed up their game.

See here the result of the vote on the African Group’s resolution: 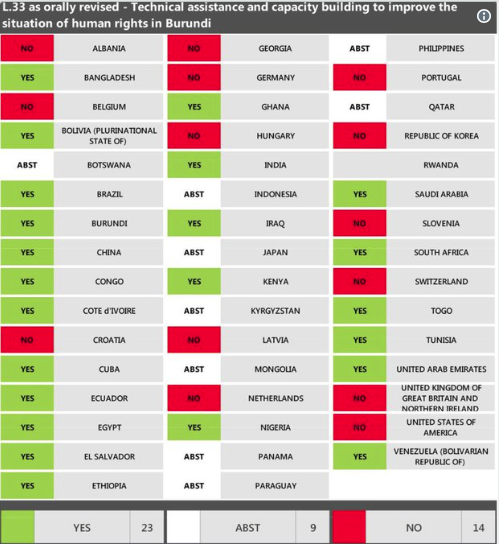 See here the result of the vote on the European Union Group’s resolution: 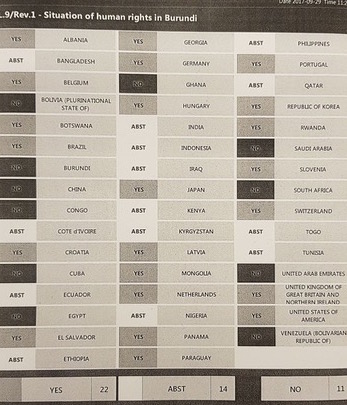 [1] Report of the Commission of Inquiry on Burundi submitted to the General Assembly on 11 August 2017, p.5

In two open letters to the UN Secretary-General and UN member States, NGOs insist that the post of High Commissioner should be filled by someone of high moral standing and personal integrity, and who is independent and impartial and possesses competency and expertise in the field of human rights.