In the context of Egypt’s upcoming Universal Periodic Review (UPR) on 13 November 2019, ISHR and its Egyptian partners are calling on States to use this opportunity to urge the Egyptian government to immediately release all detained defenders and reform its legislative framework to ensure that civil society can carry out its work without fear or threat of reprisal.

Since 2014, the Egyptian government has intensified its crackdown against human rights defenders, organisations, journalists as well as political opponents. Defenders engaging or seeking to engage with the UN are particularly targeted.

Mohammed Al-Baker, human rights lawyer and executive director of Adalah for Rights and Freedoms was interrogated about his engagement with the UPR. He was arrested on 29 September 2019 while he was representing another defender, Alaa Abdel Fattah, in the State Security Prosecution. Both were charged with misuse of social media, belonging to an illegal terrorist organisation and spreading false information. Abdel-Fattah was tortured and Al-Baker was subjected to inhumane treatment, they both remain detained.

The most recent and ongoing crackdown against defenders appears to have been carried out as a response to protests that arose throughout the country on 20 and 27 September 2019. Figures of arrests range from 2097 to 3332 persons according to independent Egyptian human rights groups. Those arrested include woman human rights defenders Mahinour El-Massry, Esraa Abdel-Fattah who is on hunger strike to protest her torture, and Asmaa Dabees.

Despite Egypt’s passing of a new NGO law, which replaced prison sentences with hefty fines, defenders are still facing up to 25 years imprisonment in Case no. 173/2011. This is possible due to an amendment passed in 2014 of Article 78 of the Penal Code on foreign funding. Read here a brief analysis of the new NGO law.

Furthermore, despite Egypt’s amendment to the protest law in response to recommendations from the UPR in 2014, protests have been defacto banned across the country. Law 10 of 1914 on assembly, which was passed in 1928 continues to be the basis for the imprisonment of tens of thousands of peaceful demonstrators according to ISHR partners, the Cairo Institute for Human Rights Studies (CIHRS) and Committee for Justice (CFJ).

Further restrictions against defenders and journalists are occurring under the guise of combatting terrorism. Under the Counter-terrorism Law (94/2015), Article 35 prohibits the publishing of information contrary to that published by the Ministry of Defense. Journalist Ismael Al-Iskandrani is currently serving a 10 year imprisonment sentence for covering news in North Sinai.

An amendment passed in 2013 of Article 143 of the Criminal Proceedings Code has made indefinite pre-trial detention possible, a tactic which could also be used to target defenders.

During the UPR Info pre-session, CFJ reported that over 500 websites are currently blocked. CFJ also highlighted the failure of the government to prevent torture. Prisons are overcrowded and subsequently facilitate the spread of diseases. CFJ has documented the death of at least 917 prisoners due to medical neglect since May 2013, including the former president Mohamed Morsy. When activists are released from prison, they are faced with police surveillance measures: they must spend hours in the police stations, reaching up to 12 hours every day.

Read ISHR’s joint briefing paper and recommendations on human rights defenders with CIHRS and CFJ, an update from October 2019 with advanced questions, and brief analysis of 2019 NGO law.

Read here the legal commentary prepared by the Cairo Institute for Human Rights Studies on the regulations of the 2019 NGO law.

Check our infographics on the situation faced by human rights defenders in Egypt: 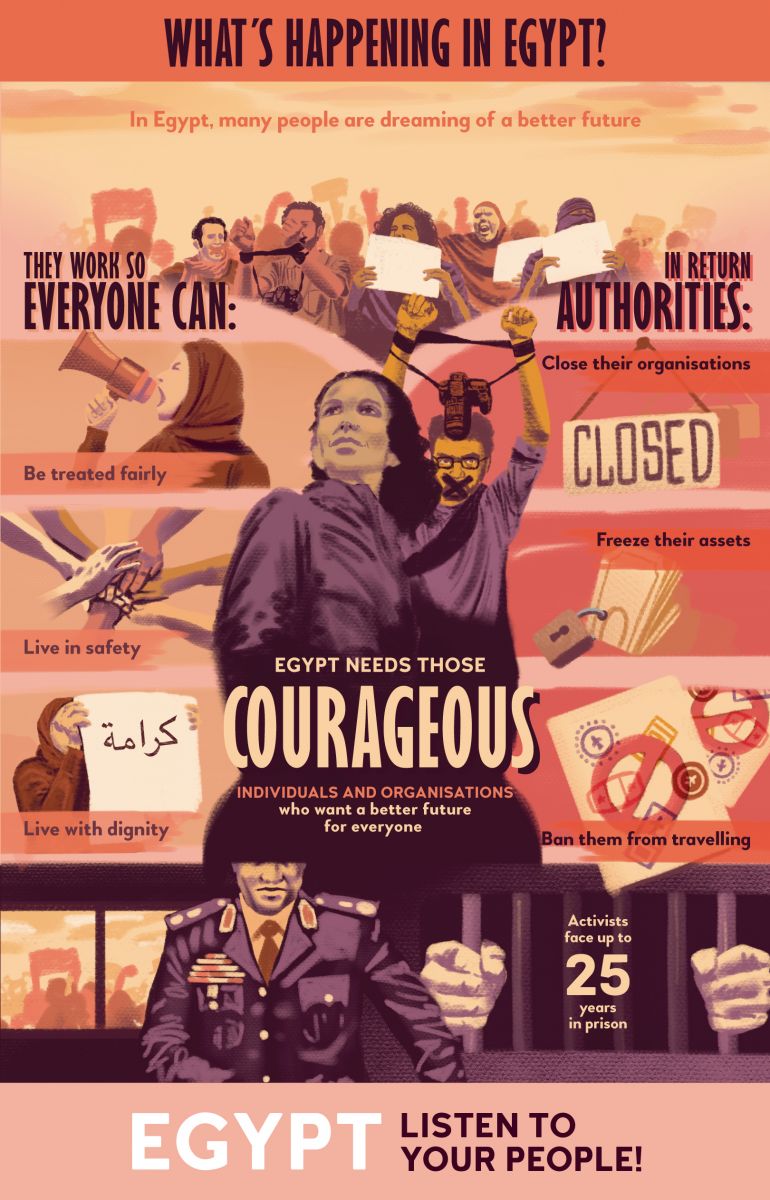 The 50th session of the UN Human Rights Council, from 13 June to 8 July 2022, will consider issues including sexual orientation and gender identity, violence and discrimination against women and girls, poverty, peaceful assembly and association, and freedom of expression, among others. It will also present an opportunity to address grave human rights situations including in Afghanistan, Belarus, China, Eritrea, Israel and OPT, Russia, Sudan, Syria and Venezuela, among many others. Here’s an overview of some of the key issues on the agenda.

ISHR and the Committee For Justice (CFJ) called the African Commission to issue public statements condemning the violations detainees in Egypt face and urge the Republic of Egypt to address inhumane prison conditions of detainees in prisons.