On 23 October, the Special Rapporteur on the situation of human rights defenders, Michel Forst, called the international community to action, urging open and frank dialogue and solidarity to address oppression. He addressed the UN General Assembly’s Third Committee and engaged in a dialogue on his report to the General Assembly.

In light of the 20th anniversary of the Declaration on Human Rights Defenders, his report focused on effective implementation strategies, incorporating both a reflection of progress made over the past two decades and an overview of recommendations on how to improve systems and mechanisms moving forward.

‘The past 20 years have been an era of struggle for human rights. Victories have been hard fought and challenges have proliferated,’ the Special Rapporteur said in his report. ‘The celebration of this milestone must be tempered by a recognition of the sacrifices of human rights defenders, their families and their communities.’

After surveying 140 States, the Special Rapporteur was prompted to address the following key matters in his report and during the dialogue yesterday: the evolution of the use of the term ‘human rights defenders’, mechanisms and practices to support them and legal/ administrative frameworks to protect them.

“20 years ago, the Declaration laid the groundwork for the protection of human rights defenders and amplified the importance of their inclusion as a stakeholder in human rights initiatives, but there is still work to be done,” said ISHR’s Legal Counsel Tess McEvoy.

The United States referenced the Secretary General’s report on reprisals highlighting attacks and intimidation against defenders in more than 38 countries, saying they are ‘alarmed and monitoring all allegations.’ The US then proceeded to list over 20 specific names of individuals from 14 different countries who are victims of such reprisals. These include: 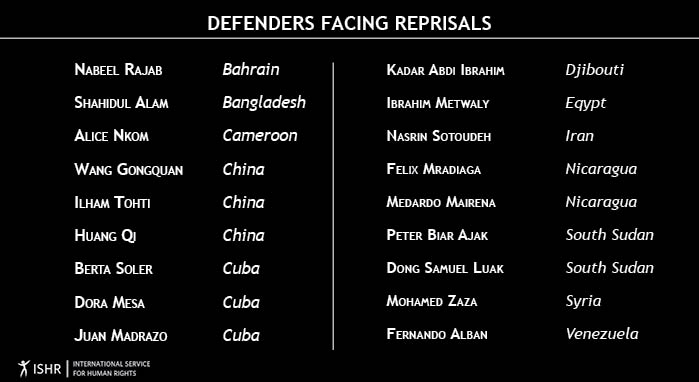 Challenges presented to the report

Both China and Iran criticised the report on the basis that defenders, activists and social leaders do not deserve ‘special treatment’ regardless of the risks these individuals face.

The Russian Federation challenged the notion of ‘State obligation’ on the basis that the Declaration of Human Rights Defenders is a non-binding document.

In response to the Russian Federation’s point on the non-obligatory nature of the Declaration of Human Rights, the Special Rapporteur swiftly reminded States that while the Declaration is non-binding it reaffirms other legally binding human rights obligations.

The Special Rapporteur concluded with a call to action at the upcoming Human Rights Defenders World Summit in Paris, where a statement will be prepared, including for presentation at the upcoming high-level event on defenders at the General Assembly.

The Special Rapporteur also referenced a document—outlining the results of his global survey on defenders in 140 countries—which he hoped would be published on the OHCHR website without further delay. He invited supporters of the mandate to inform OHCHR of the need to disseminate the report via the OHCHR website.

The Special Rapporteur referenced the study being prepared by the UN Secretary-General in efforts to protect global defenders. The report of this study will be shared with States in the coming weeks.

The Special Rapporteur also voiced concern about the lack of NGO access to the UN and asked members of the Committee on NGOs to invite him in to engage with the Committee.

The Special Rapporteur concluded by saying that his report to the Human Rights Council in March 2019 will focus on the situation of women defenders.

ISHR sheds light on the attempts by Chinese diplomats to exert undue influence over the UN expert bodies that oversee compliance with major international human rights treaties and covenants, and makes recommendations for how stakeholders can strengthen the system’s ability to fight back.

In solidarity with SouthernDefenders, ISHR supports the urgent call for an immediate investigation into the assassination of human rights lawyer Thulani Maseko in Eswatini, as well as the appeal for swift action by the Southern African Development Community (SADC) amid a mounting political crisis in the country.