(New York) – The General Assembly has adopted a significant and substantive resolution on human rights defenders despite unprecedented efforts by China and Russia to defeat the text.

For the first time in its 16-year history, a vote was called on the General Assembly’s resolution on Human Rights Defenders. Despite this attack from China and Russia, who called for the vote, the adoption of the text by a clear majority of States is a step forward in protecting those who face risks and attacks for their work to defend human rights, the International Service for Human Rights said today.

The resolution includes a number of new, important and substantive provisions, including as to the vital role of advocacy and the work of human rights defenders in contributing to sustainable development and the realisation of economic, social and cultural rights, and as to the responsibilities of business enterprises with respect to engaging, consulting and protecting defenders.

‘We welcome Norway’s leadership on this text, and congratulate the 114 delegations that stood with human rights defenders today and resisted attempts by hardliners to undermine and de-legitimise their important work,’ said ISHR Legal Counsel Madeleine Sinclair.

‘We are, however, extremely disappointed that 14 countries voted against the text and that a further 40 States took the cowardly position of abstaining,’ she added. ‘We agree with the Norwegian sponsors of the text who stated that both votes against the resolution and abstentions amount to a failure to recognise the important role of defenders and the need for their protection.’

In addition to China and Russia, States which opposed the resolution included Kenya, Nigeria, South Africa, and Myanmar. ‘It is particularly disappointing to see current and incoming members of the Human Rights Council either abstaining[1] or voting no[2] on the resolution,’ Ms Sinclair said. ‘The votes of South Africa and Myanmar are a complete betrayal of the many brave human rights defenders who have played such a vital role in the transitions in those States’.

Ahead of the vote, China explained that it had ‘no choice’ but to vote against it as ‘certain western countries’ use the protection of defenders as an excuse to ‘interfere in the internal affairs of developing countries and disrupt their social stability’. Nigeria said that they saw ‘no need’ for the resolution, effectively denying the importance of independent civil society and dissent to democracy and development. 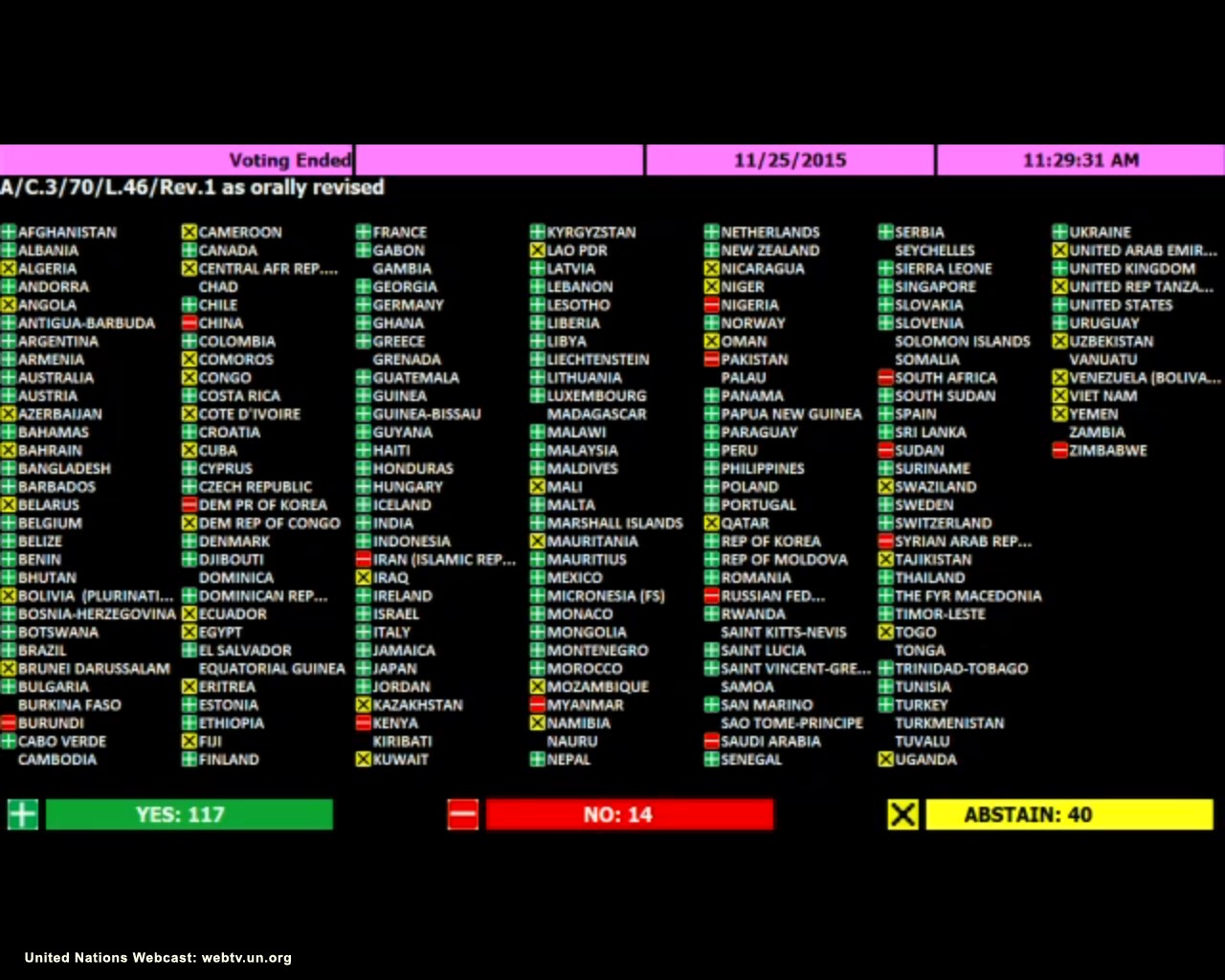 Several aspects of the resolution were fiercely debated during negotiations, with the African Group tabling a record 39 hostile amendments to the text in the days leading up to its adoption. Those amendments sought to remove references to the legitimacy of the work of human rights defenders, and delete or weaken language regarding the need for their protection. The amendments also sought to delete whole paragraphs related to the need to combat impunity for violations and abuses against defenders and the need to ensure adequate procedural safeguards in judicial proceedings. The African Group’s suggested amendments also proposed deleting a call for the release of defenders arbitrarily detained or imprisoned in violation of international human rights law for exercising their human rights and fundamental freedoms.

Over 150 NGOs, including ISHR, responded with an open letter calling on all States to stand with human rights defenders and reject the amendments put forward to weaken and undermine the text. ‘The mobilisation of civil society from all regions is a testament to the seriousness of violations experienced by human rights defenders around the world and the need for States to take stronger measures to protect and support their work,’ said Ms Sinclair.

While all 39 amendments were eventually withdrawn, unfortunately the text suffered some losses in a failed effort to reach consensus in the final stages of negotiations. ‘While we consider the text to be strong and positive overall, it is regrettable that unsuccessful efforts to try to find last minute consensus led to significant weakening of some aspects,’ Ms Sinclair said.

Some of the more regrettable concessions included a deletion of the responsibility of business enterprises to respect the rights of human rights defenders to life, liberty and security of person, especially given the serious threats and attacks faced by defenders working in the field of business and human rights. Previously agreed language referring to the need for States to respond favourably to visit requests of the Special Rapporteur on human rights defenders was also weakened, which is particularly regrettable given the Special Rapporteur’s inability to carry out any country visits this year and the fact that 44 countries had not responded to requests for a visit from the Special Rapporteur or his predecessors as of July 2015. Lastly, it is disappointing that a request of the Secretary-General to report on the implementation of the resolution was dropped in the final version of the text. While the Special Rapporteur was ultimately invited through the text to take into account progress on implementation in his monitoring, a separate Secretary-General’s report could have provided a more explicit and direct focus on the question of implementation, assisting to close the gap between the Declaration on Human Rights Defenders and the situation on the ground.

Despite these concessions the text remains an important resolution. Some of the significant steps forward in the resolution include a recognition of the vital work of defenders in promoting, protecting and advocating for economic, social and cultural rights, and an expression of concern that threats and attacks against defenders have a negative impact on the realisation of these rights.

‘For the first time, a UN resolution has implicitly recognised that advocating for the realisation of economic, social and cultural rights is fundamental both to the substance and realisation of those rights,’ Ms Sinclair said. ‘Attacks against those who advocate and agitate for the rights to access adequate housing and healthcare, for example, are attacks on the rights to housing and healthcare themselves’.

The resolution also includes a clear articulation of the responsibility of business toward defenders, including the need to identify and address the adverse human rights impacts of business activities through meaningful consultation with defenders. Additionally, it emphasises the responsibility of businesses to respect and not interfere with defenders’ exercise of the rights to freedom of expression, association and assembly.

Work to build support for the resolution will continue over the coming weeks as States will have a second opportunity to vote on the text when the plenary of the General Assembly meets in mid-December to consider resolutions adopted by the Third Committee.