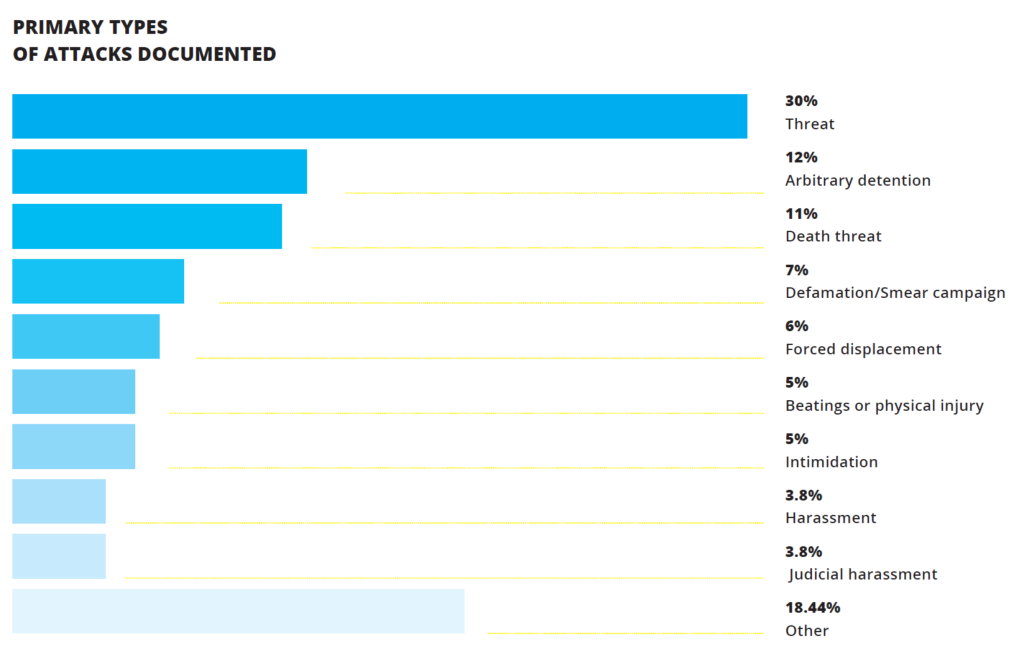 But a new dataset from the ALLIED Data Working Group, a coalition in which ISHR takes part, has for the first time documented what is often hidden – the non-lethal attacks, including threats, harassment, smear campaigns, stigmatisation that are a precursor to the shocking number of deaths we see each year.  Through a collaborative effort, ALLIED documented 355 non-lethal attacks against 536 individuals, communities, organisations and unaffiliated groups – such as those participating in a protest. The findings echo and confirm concerns raised by ALLIED member Front Line Defenders, which found that in 2019, 75% of all human rights defenders killed had previously been victims of non-lethal attacks.

Of the 355 non-lethal attacks reported, 44% took place in Guatemala, 23.4% took place in the Philippines, 22% in Colombia, 6.5% in Mexico and 4.2% in Kenya. These numbers do not come close to capturing the full scale of violence perpetrated against defenders on the ground. This is especially the case in Mexico and Kenya, where fewer cases were reported. Indigenous peoples and community members were found to be particularly at risk. Of all the non-lethal attacks documented in 2020, 83% were against indigenous peoples and community members and leaders.  Among the attacks that included information on a probable perpetrator, 44% indicated private individuals or groups in a relative position of power, while the second most common suspected perpetrator was the armed forces (12.6%), followed by the police (9%) and local government officials (6.33%).

The findings, while preliminary and limited to five pilot countries, are nevertheless concerning: defenders are being harassed, attacked and criminalised at rates much higher than previously thought.

Last but not least, the findings highlight the urgent need for States to monitor, collect data, report on the situation of these defenders, and address the root causes of the attacks on them.

For more information: Read the “Uncovering the Hidden Iceberg”, which provides further analysis on the data.

ISHR and RFK call on the Superior Court of Justice of Lima, Perú, to ensure the mining company ‘Yanococha’ is held accountable for violating the human rights of Elmer Campos and other defenders, attacked during a protest.

ISHR and Committee For Jurist (CFJ) called the African Commission to issue public statements condemning the violations detainees in Egypt face and urge the Republic of Egypt to address inhumane prison conditions of detainees in prisons.

The African Commission on Human and Peoples’ Rights (ACHPR) examined the combined report of the 12th and 13th periodic reports of the Republic of Kenya during the virtual session held from 21 April to 13 May 2022. The report presents the progress made by the country regarding the state of human rights in Kenya.