In 2021, 200 human rights defenders were killed across the world. Latin America accounts for 75% of these killings. ‘The Illusion of Abundance was made to honour the memory of these environmental land defenders who lost their lives to protect nature,’ affirmed the directors of this documentary film that narrates the story of three women human rights defenders fighting for dignity and justice. Their quest for corporate accountability brought them to Geneva, where ISHR accompanied them during the negotiations at the United Nations Palais des Nations on the elaboration of an international legally binding treaty that seeks to regulate, in international human rights law, the activities of transnational corporations. 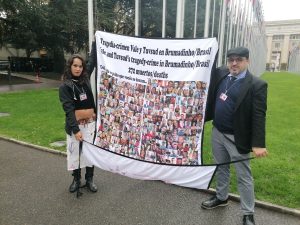 “Transnational corporations take advantage of legal gaps, weak rules and insufficient international cooperation to profit from abuses in the Global South. The window into the lives of these three women and their communities shows how far corporations are willing to go and how badly EU due diligence legislation is needed,” said Maria Arena, a member of the European Union Parliament during the screening of the film in Brussels. If the levels of impunity for human rights abuses by corporations in the EU are concerning, the situation at the global level is alarming, where businesses escape accountability through different jurisdictions, legal personalities and tax havens. The EU Corporate Sustainable Due Diligence Directive is set to pass through the Parliament this year, which is already the scenario of unequal lobbying battles between civil society coalitions and business associations that try to weaken future legislation.

At the international level, for more than seven years, civil society organisations from all regions of the world have committed enormous time and resources to push for a binding treaty on business and human rights. Last week, in Geneva, the eighth yearly negotiations took place. ISHR joined the sessions with concerns about the slow pace of progress on consultations and consensus building that Ecuador, as proponent and leader of the process, agreed to push forward and did not fulfill, including basic steps such as circulating updated drafts of the negotiated text. ‘While we’re moving closer to a Treaty, this year we saw a messy process and a divisive attempt to water down the Treaty in a non-transparent manner. This approach tried to sideline the hard work by many States across the world.  The third revised draft of the Treaty is the result of eight years of negotiations, the Chair cannot simply ignore the contributions of States and civil society,’ said Garry Walsh, Policy and Advocacy advisor at Trócaire in Ireland.

At a side event co-organised by ISHR at the UN Palais des Nations, Carolina, protagonist of the film, Brazilian journalist and human rights defender, and international lawyer Danilo Chammas, brought us the perspective from Minas Gerais, where in 2019 a waste dam from the mining giant VALE collapsed. ‘Being a human rights lawyer for more than 20 years, I have experienced a number of cases of violations by corporations that result in shameful impunity. We are at the beginning of a value chain that involves many international companies. It is time to create strong international legislation to prevent such harm and provide effective access to justice for victims,’ Danilo stated. Carolina reminded those in the room that ‘we are making our part in this global fight for corporate justice. We ask you UN Delegates to do your part to ensure that what happened in Brumadinho never happens again anywhere.’

The 8th year of negotiations did not meaningfully advance the process for the fulfillment of the rights the Brazilian defenders have been seeking. They left the UN, they said, with mixed feelings, a combination of sadness, anger, and optimism. Perhaps representing what we all felt during the week. 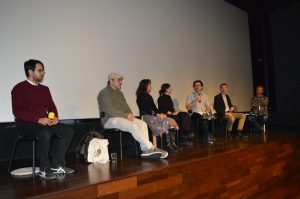 With the support of the City of Geneva, in the evening of 25 October, ISHR co-hosted a full screening of The Illusion of Abundance at the cinemas Grütli in Geneva, with the presence of Carolina and Danilo, as well as Erika Gonzalez Ramirez and Mathieu Lietaert, directors of the documentary. François Mercier from Action de Carême shared with the audience his perspectives on the evolution of the legislative measures happening in Switzerland for a stronger regulation towards responsible business conduct. Andrés Zaragoza (ISHR) moderated the event, making the links between the admirable work of human rights defenders there where abuses happen and the long-term path of reforming international human rights law to ensure that businesses are held accountable for the abuses they commit.

The evening culminated a process that started in the 2022 edition of the International Film Festival and Forum on Human Rights when, as part of the Impact Days, cinematographers and civil society met each other to further their common objective: creating long-lasting change through films.

At the NGO Forum ahead of the 73rd session of the African Commission on Human and Peoples’ Rights (ACHPR), representatives of UN mechanisms and of civil society gathered to discuss the potential impacts of the implementation of the African Continental Free Trade Area for climate change, food security, and the human rights of the citizens of its signatory States.