On 15 October 2019, the Special Rapporteur on Human Rights Defenders Michel Forst presented his report (A/74/159) to the UN General Assembly’s Third Committee on the issue of impunity for attacks and reprisals against human rights defenders. This was followed by an interactive dialogue with States. This is the last time Forst will address the Third Committee in the capacity of Special Rapporteur.

‘Impunity is used as a weapon by those who wish to undermine the rule of law and silence those struggling to uphold human rights. I echo Forst’s comment that impunity is a political choice, otherwise how do we explain that around 98 percent of killings of human rights defenders in certain countries remains unpunished?’ asked ISHR’s Tess McEvoy.

The Special Rapporteur – and the United States – highlighted individuals and groups from various countries who are victims of reprisals. These included: 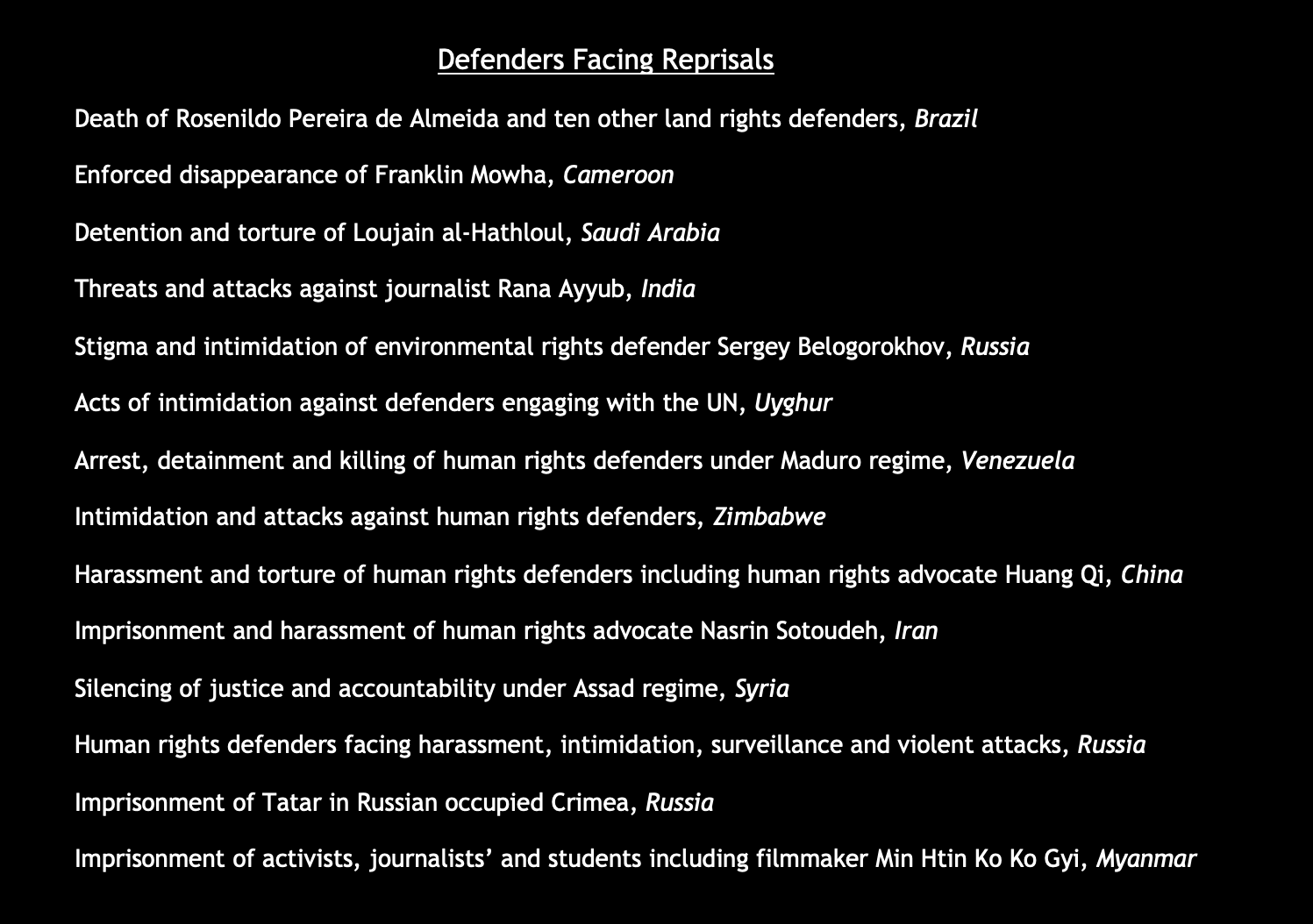 The Special Rapporteur’s report made recommendations to States on ways to effectively combat impunity. These included:

These recommendations were echoed in a side event organised by ISHR and Amnesty International on 16 October, where women human rights defenders from Yemen and Myanmar provided harrowing accounts of attacks they face in their respective contexts.

Responses to the report

Several States voiced their support for the report and the mandate, including Norway who called on all States to support this year’s resolution on Human Rights Defenders currently being negotiated.

Notwithstanding the adoption by consensus of a definition of human rights defenders in the 1998 Declaration on Human Rights Defenders, the usual detractors – including Russia and China – sought to delegitimise the work of human rights defenders by questioning whether the term is universally recognised. China went further to suggest that individuals were using the ‘flag of defending human rights’ to violate the law.

The role of non-State actors

Notwithstanding the primary responsibility of States to combat impunity for attacks against defenders, the Special Rapporteur again emphasised his call for non-State actors to protect human rights defenders, and concluded by referencing his 2017 report on Business and Human Rights (A/72/170).

ISHR would like to thank Norway for leading this year’s resolution on human rights defenders. We call on States to support a strong and robust resolution.

Following the adoption of resolution 48/16, a mandate of UN Special Rapporteur on Burundi was established. During its 49th session, the Human Rights Council appointed Fortuné Gaetan Zongo as the mandate holder. On 29 June 2022, he presented his first oral update during the 50th session of the Council.

Human rights defender Mohamed El-Baqer must be released immediately and unconditionally, stated 19 human rights organisations. His detention is arbitrary, aimed at punishing him for his legitimate human rights work and is only putting his life and psychological well-being at serious risk.