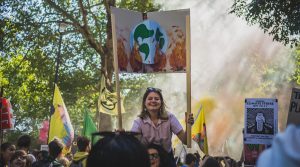 Photo by Gabriel McCallin on Unsplash

On 28 July 2022, for the first time the United Nations General Assembly (UNGA) adopted a landmark resolution recognising the human right to a clean, healthy and sustainable environment. The text, proposed by Costa Rica, the Maldives, Morocco, Slovenia and Switzerland was adopted with a vote of 161 Member States in favour, zero against and eight abstentions (Belarus, Cambodia, China, Ethiopia, Iran, Kyrgyzstan, the Russian Federation, and Syria). The resolution, based on a similar text adopted last year by the Human Rights Council, calls upon States, international organisations, and business enterprises to scale up efforts to ensure a healthy environment for all.

The resolution will also assist States to accelerate the implementation of their environmental and human rights obligations and commitments by strengthening national laws and policies. Just as the UNGA resolution recognising the right to water and sanitation in 2010 resulted in ‘a cascade of positive changes that have improved the lives of millions of people’, this resolution can be ‘a catalyst for action, and empower ordinary people to hold their governments accountable in a way that is very powerful,’ noted the UN Special Rapporteur on human rights and the environment, Professor David Boyd.

‘We regret that the resolution did not strengthen or include any language on the protection of EHRDs as an intrinsic element of the right to a clean, healthy and sustainable environment, despite the 2019 Human Rights Council resolution 48/13 recognizing EHRDs’ contributions’, said ISHR’s Maithili Pai. Several Member States expressed their disappointment at this lost opportunity during the resolutions’ adoption, including the European Union, Japan, New Zealand, Norway, United Kingdom and the United States. ‘Despite this, the recognition of the right to environment represents significant progress for EHRDs who continue to face some of the most severe forms of reprisals, including killings, in response to their valuable work to promote and protect the right’ said Pai.

‘We welcome this resolution as a watershed moment in history, both in regards to its passage and its overwhelming political support. We hope that it will lead to the strengthening, and effective implementation, of domestic laws and policies, as well as international laws and norms,’ said ISHR’s Maithili Pai. ‘The recognition of the right however is only a drop in the ocean in the context of the current environmental crises, which is only growing. States must now implement their commitments and take national level action. Now is the time for action, action in which EHRDs have a critical role to play.’ Pai added.

Futures thinking encourages us to identify small ‘signals of change’ which might help to identify and influence the futures that come to pass. At ISHR we’ve identified and, together with advocates and activists from around the world, helped contribute to a number of small but significant signals of positive human rights change in recent weeks.

It's difficult to encapsulate such a complex year in a word, but "interconnected" is one that comes to mind when reflecting on 2020. We are proud to have remained deeply interconnected with defenders and to have supported, protected and amplified their work at the national, regional and international levels. With them, the "essential workers" of our times, we strive for a 2021 full of freedom, equality, dignity and justice.