The frequency of public security organs using ‘Residential Surveillance at a Designated Location’ (hereafter: RSDL) is not high: the proportion of cases where RSDL is applied to criminal trials across the country does not exceed 0.1% each year. The number of people under RSDL accounted for 5.68% of the number of people under residential surveillance more broadly[1]. The reason is that RSDL is an expensive coercive measure. Considering security precautions and other factors, the location needs to be (protection on the walls), monitoring needs to be installed, and public security officers and bailiffs who assist in implementation are required to conduct 24-hour uninterrupted operations. Surveillance costs a lot of money every day, it requires more manpower and material resources, and the handling of the case is risky[2]. If escape, suicide, self-mutilation or other incidents occur during the implementation of RSDL, the public security organs shall also bear corresponding responsibilities[3]. Therefore, public security organs may not very inclined to carry out RSDL[4].

So why do public security organs sometimes use a detention method that is so time-consuming, resources- and labor-intensive? Wouldn’t it be better to put the suspect directly in a detention center? In what types of cases would the police prefer to use RSDL?

Criminal lawyers know that it is not only in cases involving human rights, national security, or alleged terrorist activity[5] that the police tend to use RSDL. In many major and complex cases, the police also tend to use it, inluding those involving: : gang crimes[6], a high degree of public attention, negative social influence, etc. In these major and complex cases, a task force[7] is generally set up to provide special case-handling funds[8] for investigation, and higher-ranking leaders will put pressure on the investigation and handling of the special case to solve it. 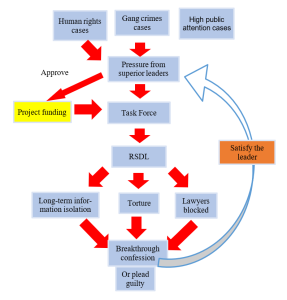 Crimes subjected to RSDL measures are often difficult cases that are highly dependent on oral confessions, prone to cases, involve a large number of people, for which it is difficult to obtain evidence or which it may be difficult to characterize[9]. Empirical investigations show that, through RSDL, pressure is exerted on criminal suspects to break through their psychological defenses, to achieve the purpose of solving cases, digging deeper into the case, or forcing criminal suspects to return money and property involved in the case[10], in order to meet the requirements laid out by the task force headquarters[11]. The 2014 ‘Henan Yearbook’[12], edited by the Henan Provincial Government, ‘insisting on the use of RSDL as an important measure to break through major and complex cases’[13]. The convenient and isolated interrogation space at the so-called ‘designated location of residence’ are considered by 85% of pre-trial police and 87.5% of public security police to have a great influence on obtaining a confession[14]. It is obvious that when handling difficult cases, public security organs will apply RSDL to meet the ‘case-handling needs’[15] for confessions.

However, the biggest risk of abuse of RSDL is that once the measure exceeds its legal boundary, it is very likely to evolve into a disguised detention or even a form of high-intensity detention, which seriously violates a series of basic rights of criminal suspects and encourage extracting confessions through torture[16]. It could result in long-term information isolation of the suspects – restricting lawyers’ meetings[17] and communications – and torture. 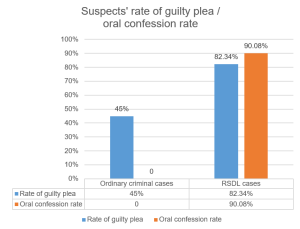 It is not difficult to understand why among the suspects placed under RSDL, the oral confession rate nears 90.08%, and the overall rate of is as high as 82.34%[18], which is much higher than the 45% rate indicated in the ‘Midterm report of the Supreme People’s Court and the Supreme People’s Procuratorate on the pilot work of the leniency system for admitting guilt and accepting punishment in criminal cases in some regions’’[19]. The reason for that is that the application of RSDL provides greater ‘convenience’ for continuous monitoring and interrogation strategies. This extraordinary confession rate and degree of cooperation also seems to confirm to a certain extent a large number of apprehensions and concerns about illegal interrogation[20].

[1] Xie Xiaojian and Zhu Chunji: <An Empirical Study on the Application of “Residential Surveillance at a Designated Location” by Public Security Organs – Taking 5,955 Big Data Samples as the Object>, published in <China Law Review>, No. 6, 2019

[2] Ma Jinghua: <An Empirical Analysis of the Application of “Residential Surveillance at a Designated Location” Measures by Public Security Organs – Taking a Provincial Capital City as an Example>, in <Studies in Law and Business>, No. 2, 2015

[3] https://mp.weixin.qq.com/s/9A1zXvfip9i5Dh4RlnT8OQ  Suspect had rare encephalopathy during RSDL, and vice-captain of criminal police was charged with intentional injury, 7 July 2021

[5] http://www.jcrb.com/prosecutor/thepractice/201310/t20131029_1234801.html  Title: Some Problems Encountered in RSDL in Practice, Abstract: The value of RSDL is that, first, it can ensure spatial isolation and information advantages for criminal suspects, has a long adaptation time, and is conducive to the handling of special cases such as crimes endangering national security, terrorist activities, and particularly major bribery crimes.

[9] Cai Yisheng: <An Empirical Study on the Application of “Residential Surveillance at a Designated Location” by Public Security Organs: Using 703 Judgments from 2018 to 2019 as the Main Analysis Sample>, <Journal of the People’s Public Security University of China: Social Sciences Edition>- No. 4, 2020

[10] Luo Xiaoyu: <An Empirical Study on the Application of  “Residential Surveillance at a Designated Location” Measures by Public Security Organs>, Southwest University of Political Science and Law, 2015 Master’s Thesis, p.15.

Title: Why Extortion of Confessions by Torture Repeatedly Banned But always Exists in Gang-related Cases…, Abstract: During April and May 2020, in Room 13 of the Liling City Anticorrosion Education Base (Dishuijing), during the interrogation, the chief public security officer Zhang XX xue, Zhu XX, Yan XX wei, and Zheng XX yang formed a group of four. Since the facts of the suspected criminal behavior explained by Wu XX ming could not meet the requirements of the task force headquarters, the four people including Zhang XX xue were criticized, and then,Zhang XX xue beat Wu XX ming on the head and face several times with slippers, and also scolded Wu XX ming for making him criticized by the leaders. If he did not cooperate actively, he would be beaten for a long time.

[15] Xie Xiaojian and Zhu Chunji: <An Empirical Study on the Application of “Residential Surveillance at a Designated Location” by Public Security Organs – Taking 5,955 Big Data Samples as the Object>, published in <China Law Review>, No. 6, 2019

[18] Cai Yisheng: <An Empirical Study on the Application of “Residential Surveillance at a Designated Location” by Public Security Organs: Using 703 Judgments from 2018 to 2019 as the Main Analysis Sample>, <Journal of the People’s Public Security University of China: Social Sciences Edition>- No. 4, 2020

[20] Cai Yisheng: <An Empirical Study on the Application of “Residential Surveillance at a Designated Location” by Public Security Organs: Using 703 Judgments from 2018 to 2019 as the Main Analysis Sample>, <Journal of the People’s Public Security University of China: Social Sciences Edition>- No. 4, 2020, p. 43.

The author of this essay is a Chinese lawyer whose identity can not be revealed here for security reasons.

The Escazú Agreement is the first legally binding instrument in the world to include provisions on environmental human rights defenders. Environmental defenders of Latin America and the Caribbean have just concluded the first official meeting to define how to realise those promises made to enable and protect their work.