The missed opportunity of UN Human Rights Chief Michelle Bachelet’s historic visit to China on 23-28 May loomed over the 50th session of the Human Rights Council, the UN’s top human rights body, taking place from 13 June to 8 July in Geneva. In her 14 June address to the Council, Bachelet provided a succinct summary of her trip, saying she ‘engaged in dialogue with the most senior leaders and officials’ and raised concerns on ‘mass arbitrary detention and patterns of abuse’ in the Uyghur region (Xinjiang).

During the exchange, the Netherlands delivered a statement endorsed by 47 countries urging China to ‘provide meaningful and unfettered access for independent observers including [the] Special Procedures [UN experts]’. The cross-regional joint statement also calls on governments worldwide to ‘respect the principle of non-refoulement’ in light of China’s transnational repression of activists and victims. Guatemala, Liberia, Eswatini and Andorra joined the growing number of governments from all regions that are deeply concerned at the lack of an adequate UN response to China’s human rights crisis. Disappointingly, four European Union (EU) Member States – Greece, Cyprus, Malta and Hungary – have so far remained silent on the issue.

The group of countries asked Bachelet to provide more information on restrictions she faced while visiting the country and meeting civil society, and a timeline for the protracted release of her Office’s (OHCHR) report on the Uyghur region. The EU, Turkey, Norway, France, Germany, Lithuania, Czech Republic, Denmark, Australia, Iceland, Ireland, Sweden, the United Kingdom and the United States separately echoed calls for the report’s prompt release, while several also raised concerns at rights violations in Hong Kong and Tibet.

These calls prompted an expected rebuke from the Chinese side. Adopting an unusually lighter language, Cuba, on behalf of China and 68 other governments – including allies under Human Rights Council scrutiny for atrocity crimes, such as North Korea, Burundi, Venezuela, Syria and Myanmar (full list at the bottom of this article) – opposed to ‘interference in China’s internal affairs.’ A number of governments additionally voiced support for Beijing’s actions, including the Dominican Republic, Ghana, Jordan, Kenya, and the Maldives. 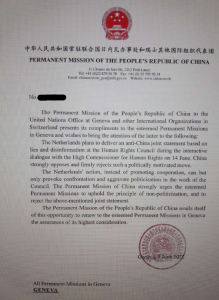 A note verbale circulated by the Chinese Mission in Geneva also pressured countries to reject what it deemed as an ‘anti-China joint statement based on lies and disinformation’ led by the Netherlands.

Against this polarised backdrop, ISHR addressed the Human Rights Council to recall the extensive documentation compiled by UN experts over the past four years, and urge Bachelet to present her Xinjiang report to the Human Rights Council. This will pave the way for an informed discussion of China’s human rights crisis, based on objective human rights concerns, with the voice of victims at its heart. Deep disappointment at Bachelet’s approach to China was similarly expressed by rights groups including Amnesty International and Human Rights Watch. Full statement here (English, Chinese) and in video below:

In response, Bachelet clarified that there were ‘limitations’ during her 6-days trip, including that she was ‘accompanied by government officials throughout the visit of Xinjiang’ and that she was ‘not able to speak to Uyghurs currently detained or their families during the visit.’ She further indicated that her Office is working to ‘update [her] assessment of the human rights situation in Xinjiang, and will share with the government for factual comments before publication.’

Her statement ‘emphasised the importance of dialogue in [her] engagement with all Member States, even on the most difficult issues’, indicating that she was taking concrete steps to implement the two agreements reached with the Chinese government; namely an ‘annual senior meeting on human rights’ and a ‘working group to facilitate substantive exchanges and cooperation’. To date, she has not provided any indication that these discussions would be open, transparent or involve meaningful civil society participation, thereby privileging private dialogue over solidarity with victims, public documentation, or accountability for perpetrators.

Bachelet also announced that she would be ending her term as High Commissioner in August, and later confirmed in a press conference that she would release her Xinjiang report before leaving.

UN experts’ unanimity on need for action on China

ISHR’s latest assessment of China’s cooperation with the UN human rights system, on the basis of the ‘objective criteria for Human Rights Council action’ (the Irish Principles), remains unchanged: the government is unwilling to recognise the scope and gravity of the country’s human rights crisis or to allow independent mechanisms to conduct an impartial inquiry. China notably indicated to the Council that the OHCHR’s Xinjiang report ‘violates the mandate of the OHCHR and should not exist and be published at all.’

Yet, as early as June 2020, 50 ‘Special Procedures’ UN experts called for ‘decisive measures to protect fundamental freedoms in China’, including the ‘establishment of an impartial and independent UN mechanism to closely monitor, analyse and report annually on the human rights situation in China.’ They highlighted a range of issues of grave concern, from the collective repression of the population, especially religious and ethnic minorities, in Xinjiang and Tibet, to the detention of lawyers and prosecution and disappearances of human rights defenders across the country.’

On 10 June 2022, 42 UN experts reiterated this call, underlining that the High Commissioner’s engagement ‘does not replace the urgent need for a complete assessment of the human rights situation in the country.’ Noting that they ‘have yet to see any signs of political will [from China] to address the concerns raised,’ they issued a vital call to uphold a ‘consistent UN approach to all States.’

Upholding the same standards and their equal application to all States big and small is important to maintaining the integrity, credibility and moral authority of Human Rights Council and UN systems for human rights enforcement around the world.

Since 2018, ISHR has documented 23 letters sent from UN experts to the Chinese government on individual cases and laws that sparked serious concerns at China’s abuse of national security laws and measures to repress and criminalise the defense of human rights.

On 7 July, the Human Rights Committee will review the state of civil and political rights in Hong Kong and Macau, building on past concerns raised by the Committee around the National Security Law, and restrictions to free speech, assembly, and association, and impunity for police violence.

This growing body of documentation points to patterns of human rights violations that, in gravity and scope, may amount to atrocity crimes under the Rome Statute. On 9 December 2021, the Uyghur Tribunal concluded that the Government of China had committed genocide against the Uyghur population through birth control and sterilisation measures.

Raphaël is ISHR's China and Latin America Advocate in our Geneva office. He joined ISHR in 2018.

Ahead of COP27, ISHR joined the open petition led by 12 Egyptian human rights organisations, calling on the Egyptian authorities to open civic space and release all those arbitrarily detained in Egypt.

ISHR joins organisations and individuals in calling on Egypt to immediately and unconditionally release human rights defender Sherif Al Rouby and the tens of thousands of others wrongfully detained.

In an open letter to representatives of all Member and Observer States, ISHR and a coalition of 8 international human rights organisations call for the UN Human Rights Council to adopt a resolution mandating a Special Rapporteur to monitor and report on the dire human rights situation in Russia.