Human rights and climate action are increasingly indivisible and the need to transition to cleaner energies has never been more urgent. Yet this transition will be set up to fail if it focuses solely on being fast, and not on also being just. Human rights defenders and indigenous peoples continue to be attacked despite their vital work for protecting the environment and fighting climate change. Only in 2021, 200 defenders were murdered.

ISHR is joining a wide range of movements and organisation 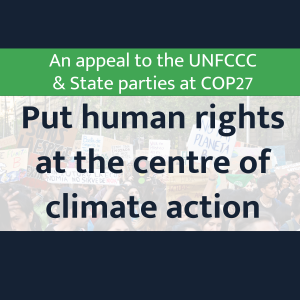 s, working for climate justice, human rights, labour rights, and corporate accountability. The message is clear: the profit-driven extractive model which has underpinned the global energy model has not provided the economic benefits or development promised to many countries and communities and has entrenched existing inequalities, putting human rights and environmental defenders at risk.

Disregarding the rights of local communities and Indigenous populations in the race to a decarbonised economy by 2050, in particular those impacted by the boom in the extraction of the minerals needed for the transition, and by land-intensive renewable energy projects, is short-sighted. It will result in numerous human rights violations and a failure of the responsibility of governments to protect human rights as established by the United Nations Guiding Principles on Business and Human Rights. It is already causing widespread abuse of land, water, and Indigenous Peoples’ rights: 495 allegations of human rights abuses were tracked so far in relation to transition minerals mining since 2010. But it will also continue to fuel opposition, conflict, and result in delays to both projects and achieving our global climate and Sustainable Development Goals (SDG) targets. Such conflict has already resulted in at least 369 attacks on human rights, labour and environmental defenders around the world since 2015, including 98 killings, related to renewable energy projects, and 148 attacks, among them 13 killings, related to transition minerals mining.

For real progress to be made at COP27, world leaders need to actively promote responsible renewable energy by:

On Thursday 10 November, India’s human rights record came under scrutiny at the UN in the context of its Universal Periodic Review (UPR).

ISHR accompanied defenders during the negotiations at the UN on the elaboration of an international legally binding treaty that seeks to regulate, in international human rights law, the activities of transnational corporations.