In an brief debate today in Geneva, States clashed over a draft resolution presented by China, which pointed at major structural concerns about the future of the Human Rights Council and, more broadly, the multilateral system.

ISHR and other civil society groups had issued a joint statement last week, noting the importance of expert access and stakeholder engagement to effective technical assistance (see below). Apropos of the ‘mutually beneficial cooperation’ initiative in particular, a group of NGOs had flagged critical flaws in the resolution, which in effect re-centres the Council’s work around dialogue and cooperation, at a cost of accountability.

‘The irony’, says Sarah M. Brooks, ISHR Asia Advocate, ‘is that a resolution on cooperation was able to move forward with such divisiveness’.

The resolution further enshrines language that draws directly from Chinese government propaganda – namely, the call for a ‘shared community of future’ – and calls for the Human Rights Council to convene an additional panel meeting and draft a subsequent report. While less ambitious than the original version, Brooks noted, it still amounts to ‘a seventy-thousand dollar price tag for something nearly half the Council is not buying’.

The political environment for the resolution was also fraught, Brooks continued: ‘Despite lip service to non-politicisation, China had clearly signed up a series of country supporters to boost its views’.

Brooks added that even some Latin American States, despite consistent support for the Council, its mechanisms and its civil society stakeholders, did ‘a one-eighty and some serious contortions’ to justify support to the resolution. EU Members States of the Council, Australia, South Korea, India and Japan voted against the resolution – securing 16 ‘No’ votes.

‘The dramatic increase in votes against the resolution, and the shift towards abstention by some countries, should be taken as an indicator that the Chinese government can no longer rely on the same old carrot-stick approach to push through its pet projects’, Brooks concludes. 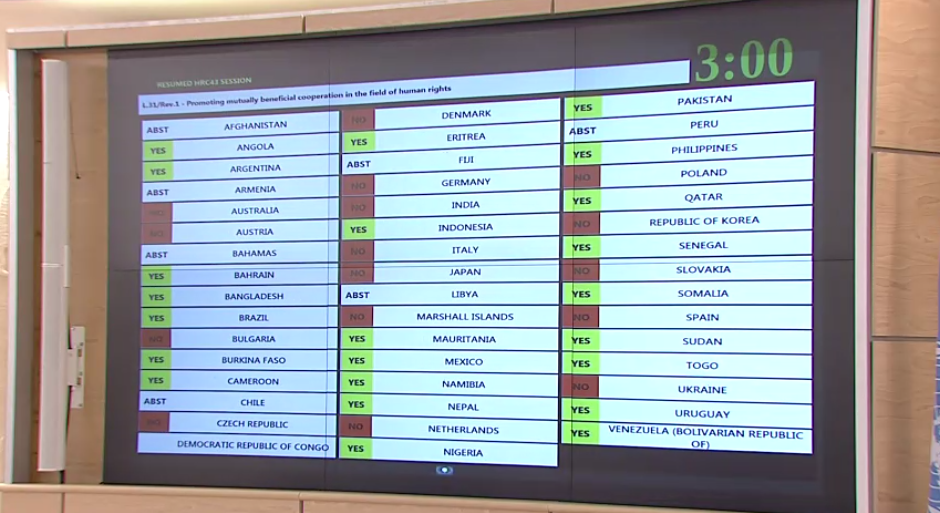 In this time of global crisis, we urge all States to recommit to enhancing the promotion and protection of human rights and the fulfilment of the UN Human Rights Council’s mandate, in­clu­ding through cooperation, dialogue, and scrutiny of specific human rights situations.

Scrutiny, along with support, is a major component of Item 10. In a recent report, “No Advice without Knowledge,” DefendDefenders found that Item 10 can be a powerful tool to bring about progress but that effective technical advice relies on the Council having detailed infor­ma­tion on the situation on the ground, including the issues and needs of recipient countries and rights-holders. A large number of Item 10 resolutions contain significant monitoring and public reporting elements.

Dialogue and cooperation should also lie at the heart of Item 10. Our organisations under­stand credible “dialogue and cooperation” on human rights to mean good-faith engagement on the part of States and a willingness to be self-reflective and self-critical, all in order to bene­fit fully from the expertise and support of the Council and its mechanisms. True “cooperation and dialogue” means a willingness to cooperate with the Council, the UPR, Special Procedu­res, and other human rights mechanisms to address challenges faced and remedy abuses. It also means recognising the important complementary role of other stakeholders engaging with the Council and governments, such as civil society organisations, human rights defen­ders, journalists and national human rights institutions. It is essential that these stakeholders are able to participate, cooperate and engage in dialogues with the Council in a safe environ­ment and without undue hindrance or fear of reprisal.

We are deeply concerned by the draft resolution tabled for consideration this session on “pro­moting mutually beneficial cooperation in the field of human rights,” which we consider seeks to undermine the carefully balanced mandate of the Council. While the initiative presents it­self as being about cooperation in the field of human rights, it is a deeply divisive and polari­sing initiative, pushing forward one singular vision of the direction of the human rights pillar at the expense of the consensus carefully forged among States over decades.

The initiative is in line with a flawed analysis set forth in a report by the Council’s Advisory Com­mittee (A/HRC/43/31), which over-emphasises, in particular, the principles of sovereignty and non-intervention (para. 104) and goes as far as referring to “so-called” universal values (para. 106). This approach, grounded in a narrative of the Council being a de-contextualised service-provider, is not only illogical and futile, but also inconsistent with the Council’s man­da­te and practice. It ignores the reality that the cause of serious violations may often be political in nature, rather than merely a lack of knowledge or resources, and the valuable role the Coun­cil can play if it has information at its disposal as a result of frank and open debate.

We urge China to reconsider the initiative, on the basis of the significant concerns raised du­ring the informal negotiations. If not, we call on the Council to reject this initiative that takes aim at its core mandate.

In two open letters to the UN Secretary-General and UN member States, NGOs insist that the post of High Commissioner should be filled by someone of high moral standing and personal integrity, and who is independent and impartial and possesses competency and expertise in the field of human rights.