Update: We did it!!! The UN Human Rights Council (HRC) adopted on 31 March 2022 during its 49th session, by 20 votes in favour, a resolution that establishes for one year a “Group of Experts on Human Rights” with a mandate to investigate and seek accountability for serious human rights violations in Nicaragua. The mechanism the Council adopted is one of the strongest in existence: it will make it possible to identify those responsible for the violations committed in Nicaragua and to preserve evidence for future justice processes. It sends a clear message to all States that non-cooperation with the universal system, and disregard for serious human rights violations, will not be tolerated.

Read more about this campaign win 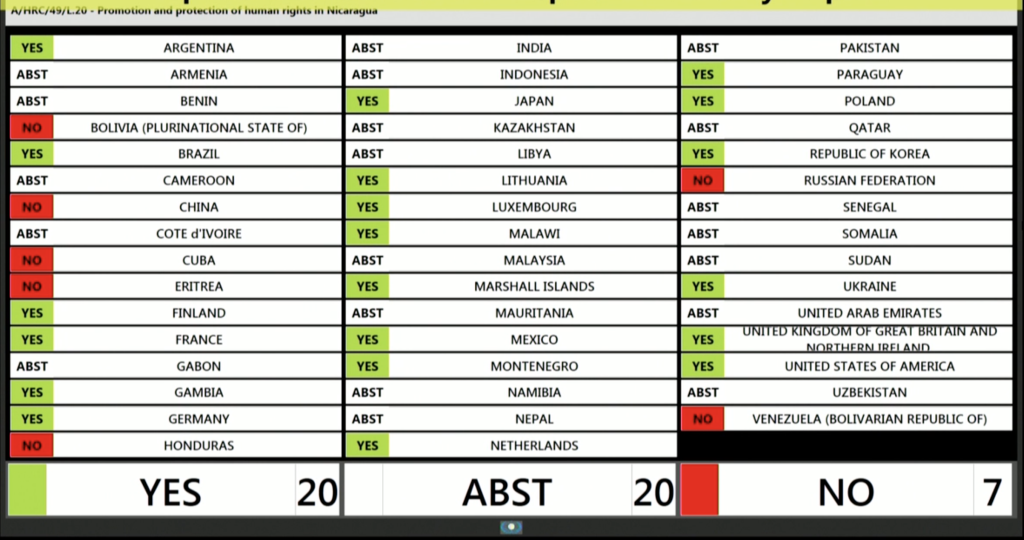 This is not currently possible in Nicaragua. Since April 2018, the government has criminalised, arbitrarily detained, tortured, disappeared, and even killed, those who promote human rights and who question the government’s way of governing, including indigenous and Afro-descendant peoples defending their ancestral territory. It has also adopted a series of laws restricting freedoms of expression, peaceful assembly and association, further closing space for civil society to push for positive change.

Recognising this crisis, the UN, through its Human Rights Council, has taken action by adopting resolution 46/2, calling on the Government of Nicaragua to adopt a series of urgent measures to resolve this multi-pronged human rights crisis. Yet, according to our research, the Government of Nicaragua has not implemented any of the recommendations of resolution 46/2. On the contrary, it has taken an increasing number of measures contrary to them.

Additionally, the Nicaraguan Government has showed no intention to resume meaningful cooperation with the international community, since it expelled the UN and Inter-American Commission on Human Rights (IACHR)’s human rights presence from the country in December 2018. During dedicated Human Rights Council meetings, it avoided addressing any substantial concern, instead rejecting all criticism as ‘interventionist and supremacist.’ It also refused to respond to questions posed by the Committee on Economic, Social, and Cultural Rights (CESCR) during its review last September.

It is time for the UN Human Rights Council to respond more assertively by establishing an international mechanism that ensures justice and accountability for Nicaragua, at its upcoming March 2022 session.

Resolution 46/2 was one of the last opportunities for Nicaragua’s Government to demonstrate its willingness to cooperate in good faith with the international community to find a solution to the human rights crisis in the country. As the Government did not take any significant steps to implement the international community’s recommendations, nor to cooperate with it, it is time for the UN to escalate its response, at the March 2022 session of the Human Rights Council.

We want the Human Rights Council to appoint a group of international, independent experts, to inquire into grave human rights violations since April 2018, as well as its root causes, with a view to holding perpetrators accountable in the future.

This should, in the long run, push the government of Nicaragua to respect the human rights of all Nicaraguan people. We want to see justice, truth, reparations and guarantees of non-repetition, for the victims of human rights abuses documented since April 2018. This includes the restoration of genuine rule of law, the recognition of the ancestral territories of indigenous and Afro-descendant peoples, as well as free, fair and transparent elections, and a participatory democracy, so that everyone in Nicaragua can live in peace, freedom, security and dignity.

What should the international community do?

Given the scale and gravity of  rights violations being committed, and the Government’s protracted lack of willingness to address the crisis nor to cooperate with the UN, it is time the UN – through its Human Rights Council – appoints a group of independent international experts to inquire into the situation. In its last paragraph, resolution 46/2 called on the Council to ‘consider all measures available to strengthen the promotion and protection of human rights in Nicaragua’ – a call since reiterated by High Commissioner Bachelet.

In this context, we launched during a press briefing on 4 November 2021 our global call for the UN Human Rights Council to establish an international accountability mechanism for Nicaragua, when it will consider renewing its annual resolution on Nicaragua at its upcoming March 2022 session.

This group of independent experts’ mandate must be based on the needs and recommendations from Nicaraguan civil society. It should be adequately staffed and resourced, and mandated to investigate grave human rights violations taking place since April 2018, as well as its root causes; and to collect and preserve evidence with a view to ensuring that perpetrators of violations or abuses of international human rights law are held accountable and can eventually be brought to justice in the future. 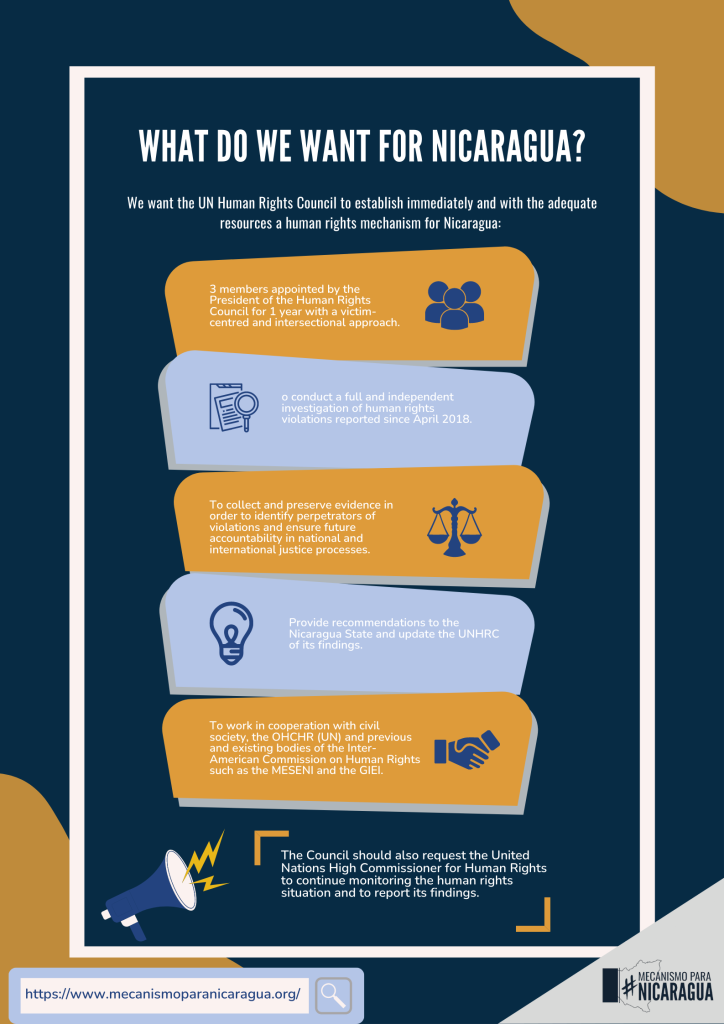 Nicaragua needs justice and truth to get out of this crisis and recover as a society. Share this campaign page and raise awareness with a journalist you know, your peers, or on social media, with the hashtags #MecanismoParaNicaragua and #SOSNicaragua. We have prepared a pre-made tweet to help you: click on the image below or copy-paste this link in your browser: https://ctt.ac/1Zee1

For security reasons and the high risk of reprisals, not all the members of the Colectivo can be publicly identified.

We call on all States to ensure a strong joint position building on past cross-regional joint statements, to express deep concern over grave violations in the country and indicate support for the creation of a UN-mandated accountability mechanism at the 49th session of the Human Rights Council.

Based on Nicaragua’s obligations under international law, resolution 46/2  expresses in a clear and detailed manner the main concerns of the international community in relation to the human rights crisis in the country. It urges the Government to take a series of urgent measures to revert course on the country’s multi-pronged crisis. These measures range from freeing those arbitrarily detained and refraining from targeting human rights defenders and civil society organisations, to repealing restrictive laws, ensuring an independent judiciary, respecting the rights of indigenous peoples, preventing gender-based violence, realising the rights to health, education, and work, and resuming cooperation with the international community.

In addition to expressing concerns, the resolution renews and expands the monitoring mandate of the High Commissioner for Human Rights, Michelle Bachelet, on the situation in Nicaragua. Under this mandate, the High Commissioner is to present an oral update on the situation in the country at the June and September 2021 sessions of the Council, another oral update in December (outside of regular Council sessions) following the November 7 presidential elections, and a comprehensive report on the human rights situation in Nicaragua to be presented at the next session of the Council in March 2022.

The Human Rights Council should adopt a resolution in March 2022 establishing an international mechanism that allows investigation and accountability for Nicaragua. This mechanism should be mandated to investigate allegations of serious human rights violations since April 2018 as well as the structural causes of the human rights crisis in the country.

Regardless of the name of such a mechanism (Commission of Inquiry, or Fact-Finding Mission), this mechanism should be mandated to verify the facts of alleged serious human rights violations, and to collect and preserve evidence with a view to ensuring that perpetrators of violations or abuses of international human rights law are held accountable and can eventually be brought to justice in the future. The mechanism should also be composed of at least three independent experts, and be provided with the necessary technical assistance and financial resources to carry out its mandate.

Moreover, this resolution should also maintain the monitoring mandate of the High Commissioner for Human Rights, to ensure that her Office has sufficient capacity to continue to collect and document existing information on all aspects of the human rights crisis in the country.

Nicaragua needs justice and truth to emerge from the crisis and recover as a society. The mechanism will pave the way for a long-term process of transitional justice in the country, and international justice for perpetrators of grave violations, given the absence of an independent judiciary.

Check out our Evaluation Benchmarcks of resolution 46/2

Colectivo 46/2 has launched a series of Evaluation Benchmarks to assess the degree of implementation of the 14 recommendations in resolution 46/2 by the Government of Nicaragua. The first Benchmark was published in August 2021, the second one in November 2021 and the third and last one in February 2022. These documents assess government action - or inaction - against a series of clear objectives, and draw on public information from the United Nations and Inter-American human rights systems, as well as from independent civil society and media reports. (Photo: ©Jorge Mejia Peralta)

Join our email list to receive the latest updates on human rights in Nicaragua.