Human rights defenders are a vital component of healthy societies. At ISHR, we believe that businesses and human rights defenders operate in and benefit from a “shared civic space” defined by common, fundamental essential freedoms. These are essential to the realisation of all human rights, but also critical to enable stable, profitable and sustainable business environments in which companies thrive and economies, communities and people prosper.

Human rights defenders face all sorts of threats and attacks in their attempt to defend their rights and those of their communities. However, behind every assassination that makes it to the news, there is a large number of non-lethal attacks. The official and reported situation of attacks on human rights defenders is just the tip of the iceberg.

Denise Musni, from the Asian NGO Coalition for Agrarian Reform and Rural Development, highlighted the important gap between reports and the full scope of the violence that defenders face. Using the data from a study by the Allied Data Working Group, it was underlined that only 6% of countries submitted reports on any data on the relevant Sustainable Development Goals indicators (SDG 16.10) linked to human rights defenders, while 227 killings of environmental defenders were registered by Global Witness in 2020. 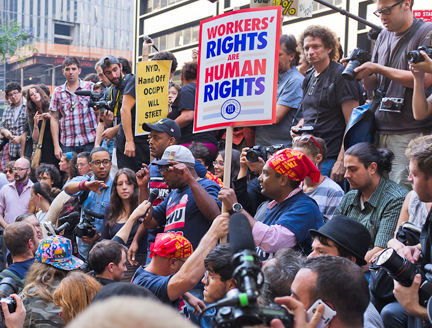 However, not all attacks against defenders are by physical violence. Strategic Lawsuits Against Public Participation (SLAPPs) constitute a high risk for rule of law and democracy globally and a means to silence civil society’s claims. The Coalition Against SLAPPs in Europe has been reporting this increasing phenomenon that now amounts to around 570 cases. Mary Lawlor, UN Special Rapporteur on the situation of Human Rights Defenders, declared being particularly concerned about such attacks because of her findings after 12 months of investigations. For her, SLAPPS are “used against defenders to stigmatise them, isolate them, divert their time, waste their precious resources which they could be using to help others and give an excuse to States to attack them. (…) Thus, offenders should be named and shamed.”

Often, economic activities and concrete business practices are linked to attacks on defenders. Anita Ramasastry, from the UN Working Group on Business and Human Rights, confirmed that businesses can be part of the problem but also contribute to solutions. The new UN Guidance aims to ensure respect and protection for human rights defenders. Businesses need to understand that this is a global problem and that the negative impacts can have effects on them too. They should respect human rights in their operations as reflected in the UN Guiding Principles on Business and Human Rights. The guidance provides them with practical steps to prevent or stop the abuses.

Bill Anderson, Vice President of Global, Social and Environmental Affairs at Adidas, brought the perspective from the private sector. He reinforced the constructive role of initiatives such as the Business Network on Civic Freedoms and Human Rights Defenders, where progressive companies commit to identifying ways that businesses and society can benefit from increased support from the private sector for the protection of civic freedoms and human rights defenders. Best practices can be implemented by business if there is enough willingness inside the company. Bill highlighted the new UN Guidance as the way to go on the role of the private sector in the civic space. 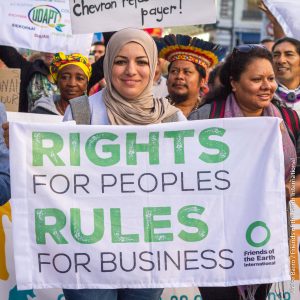 States and political and economic organisations should also exercise their legal and policy leverage to protect human rights defenders. In this sense, Caterina D’Osualdo provided technical details about a proposed legal framework of the European Union aiming to improve the protection of journalists and human rights defenders from abusive court proceedings, the above mentioned SLAPPs. The proposed directive is a strong positive exercise that should be further developed and adopted.

Andrés Zaragoza, from ISHR, having discussed in depth with both civil society and members of the business sector, considered the new UN Guidance as the golden standard to be implemented by responsible businesses, including investors, who play a crucial role and possess enough leverage to shape the global economy, the way companies operate, pushing for respect for human rights and sustainable development models.

However, despite positive steps, human rights abuses linked to business activities continue every day. The journey towards implementation of human rights due diligence by companies is long and we are very far from any satisfactory conclusion. At ISHR we continue working so that both companies and States respect and protect human rights and victims of abuses find remedies to their harm.

Samira has joined the Geneva team as a programme Intern. She is actually completing a Master’s degree at Sciences Po Rennes that focuses on the upcoming transitions, with a focus on legal transitions. She also likes to get involve in actions that promote climate justice wether it is locally, with her local Oxfam group, or regionally, with the World’s Youth for Climate Justice Campaign.

Despite their vital work for protecting the environment and fighting climate change, Indigenous peoples as well as land and environmental defenders continue to be attacked. New data shows alarming pattern of violence and harassment as a precursor to lethal attacks against defenders. This needs to change!

A historical first step or the beginning of a tick-the-box exercise? The EU Commission proposes a Directive on corporate sustainability due diligence which would establish new human rights requirements for companies. The proposal is a milestone for the protection of people and the environment, but fails to recognise and include the voice of human rights defenders.