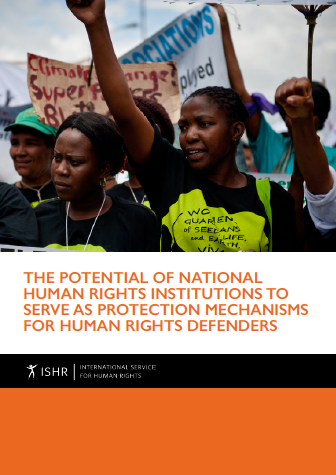 The study on the potential of National Human Rights Institutions (NHRIs) to serve as protection mechanisms for human rights defenders examines existing NHRIs in Burkina Faso, Côte d’Ivoire, Mali, Niger, Sierra Leone, and Togo with a view to determine the complementarity of the power, mandate and functioning of these NHRIs with the minimum principles of a protection mechanism as set out in the Model Law for the promotion and protection of human rights defenders.

In several African countries which have adopted laws for the promotion and protection of human rights defenders or are in the process of doing so, the NHRI often present itself as the logical body to host the defenders’ protection mechanism. The mechanism will be tasked to ensure the implementation of the newly adopted defenders’ law, among other things. The study particularly reviews the current mandate as well as the capacity and resources of the NHRIs examined and the needs which remain to be fulfilled for NHRIs to effectively play this role.

This study is aimed at giving a comparative analysis of the essential principles and functions of a national protection mechanism, as set out in the Model Law, and the extent to which those elements are realised in existing NHRIs in Burkina Faso, Côte d’Ivoire, Mali, Niger, Sierra Leone, and Togo.

It outlines the advantages, as well as limitations, of housing national defenders’ protection mechanisms within NHRIs, and provide recommendations aimed at enhancing their ability to do so.

For more information on the study, please contact Adélaïde Etong Kame at [email protected] or @Adelaide_ISHR